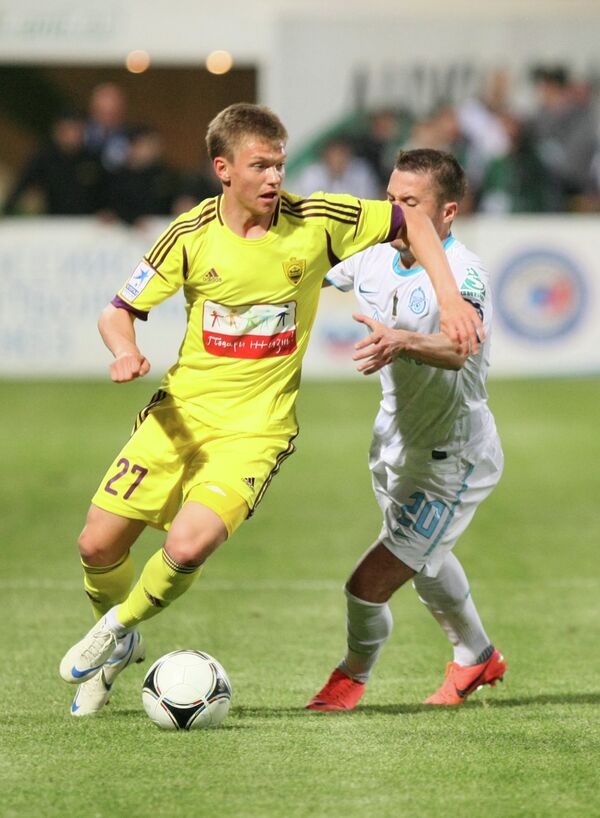 Anzhi become the first team to take points off Zenit this season after ending the leaders’ four-game winning streak in a match where both teams were hit by injury.

The draw lifts Anzhi to seventh, while Zenit go a point clear of Spartak Moscow at the top.

Zenit's players showed individual skill for the opener on 19 minutes, Vladimir Bystrov weaving round Christopher Samba before passing to Konstantin Zyryanov, who tricked Rasim Tagirbekov with a feint before coolly slotting the ball past Vladimir Gabulov.

Diminutive winger Oleg Shatov equalized for Anzhi on 66 minutes, striking the ball through goalkeeper Vyacheslav Malafeev’s legs at the far post after Christopher Samba headed on a long throw.

Both teams fielded improvised striking partnerships in the absence of senior players.

On 17 minutes, Zenit had the first serious chance of the game, Vladimir Bystrov pulling back a cross from the touchline to Djordjevic, who hit the post with a spectacular volley.

Fifteen minutes later, Anzhi tested Malafeev when Traore got his head to Oleg Shatov’s free-kick, but Malafeev produced a quality save to turn the low header over the bar, banging his head on the post in the process, although without any serious ill effects.

In first-half stoppage time, Djordjevic hit the post again with a powerful strike from the edge of the area.

On 60 minutes, Zenit defender Aleksandar Lukovic hit Anzhi’s ex-Chelsea wing-back Yuri Zhirkov with an elbow to the face, but escaped a booking, while Zhirkov spent several minutes receiving treatment plus time off the pitch to change his bloodied shirt.

Anzhi pushed for a winner after Shatov’s equalizer but failed to set up clear-cut chances as the game became scrappier and bad-tempered, with four bookings in the last half-hour.

At the other end, Djordjevic skewed a shot high and wide in Zenit’s best chance for a winning goal.