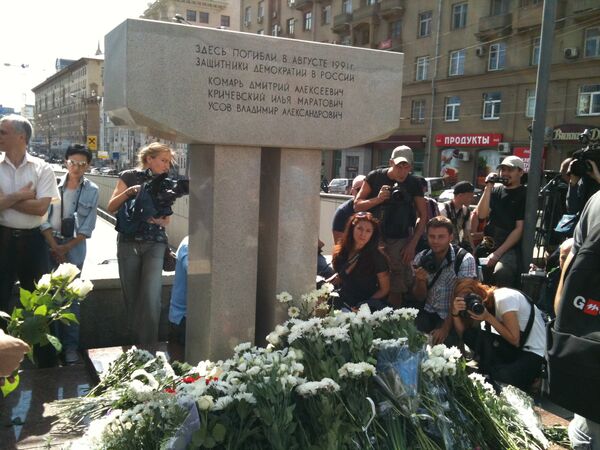 Cyber outrage against the jailing of the anti-Kremlin feminist punk band Pussy Riot failed to spill onto the streets, with the turnout at the first opposition rally to follow the verdict on Sunday being dismally low compared to previous protests.

Cyber outrage against the jailing of the anti-Kremlin feminist punk band Pussy Riot failed to spill onto the streets, with the turnout at the first opposition rally to follow the verdict on Sunday being dismally low compared to previous protests.

“We are going keep on coming out in the streets,” said Maya, a 25-year-old gay rights activist in a Pussy Riot T-shirt who declined to give her last name. “What else is there left to do?”

But this time, absence mattered more than presence. Only about 500 protesters, by Radio Liberty's count – the only estimate available – gathered at the rally by the White House in Moscow, compared to tens of thousands who came to previous major protests going on since December.

Granted, the event was more divisive than usual: the formal purpose was to mark the 21st anniversary of a failed coup by Communist Party hardliners, which was stopped by mass protests in Moscow, spelling the end of the Soviet Union. Many leftist activists, a considerable force in the opposition, opted to skip the Sunday protest.

All day, sympathizers came to lay white flowers to the monument on the downtown Novinsky Boulevard, marking the spot where three protesters, the only victims of the coup, were ran over by tanks in 1991.

The turnout at the ceremony did not exceed a couple dozens at any given moment, though people continued to come and go throughout the day. Opposition figurehead Alexei Navalny and protest-minded novelist Boris Akunin were among those who attended.

Someone added a tiny white teddy bear to the heap of white flowers. It sported a white ribbon, a symbol of the recent anti-Kremlin protests, and looked forlorn and alone in a circle of press photographers who outnumbered the mourners.

“It's not like we're expecting anything to change as soon as we step out into the streets,” said protester Lev Brylyov.

“We're creating a vibe, a community that will be ready to react when things start happening,” said Brylyov, 30, a doctor who said he participated in several recent mass protests in Moscow, which unsuccessfully opposed Vladimir Putin's return to presidency.

A biker rode by around 2 p.m. on a roaring motorcycle, slowing down for a second to drop off a heap of white flowers.

Many missed him, however, because at the same time police were busy nabbing a solitary protester who dared to put on a balaclava like those worn by Pussy Riot.

Three members of the feminist punk band were jailed for two years each on Friday for performing an anti-Kremlin song in a church. The judge convicted them, finding them guilty of inciting religious hatred, but group members and most analysts said the verdict was masterminded by the powers that be as a warning for protesters.

Perceived Kremlin offenses against the opposition have boosted protest attendance in the past, but not on Sunday. However, the crowd at the rally that followed the flower laying ceremony did not look cowed either: instead, most people appeared tired and apathetic, like during some tiresome bureaucratic event.

The reaction was predicted by most pundits, who pointed out that the recent protests failed to prompt the Kremlin to enter into dialogue with its critics. Instead, the authorities moved to tighten the screws, passing harsh political legislation, detaining a dozen protesters over riots at a rally in May and searching the homes of opposition leaders.

Party flags were waved and predictable anti-Kremlin speeches were made at the Sunday rally, organized by the liberal opposition party RPR-PARNAS, headed by longtime Putin enemy Boris Nemtsov, one of the speakers.

But many protesters opted to sit out the event on a nearby lawn, squinting in the the hot August sun, talking music or staring into their smartphones instead of paying attention to the stage.

“People were more ready to protest back then,” said Yakov, 79, himself a veteran of the anti-coup protests of 1991 who continues to attend rallies two decades later.

But current protests are part of the same glacial shift toward democracy that began in 1991, said Yakov, who declined to give his last name, saying he is not looking for publicity.

The protest ended without intervention from dozens of policemen hiding in the shade on the rally's fringes. As the crowd drifted toward the subway, it slowly dissipated in the much larger throng who opted for the nearby Moscow Zoo instead of the opposition rally.