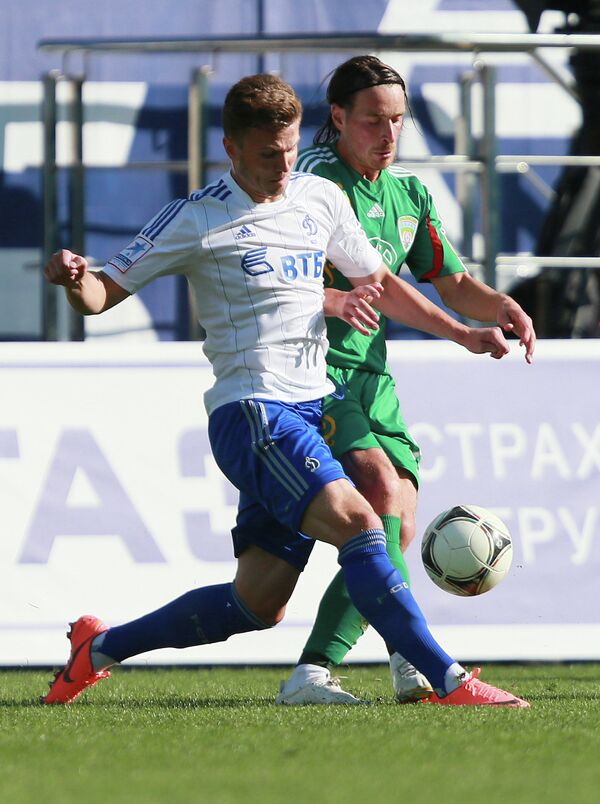 New coach Dan Petrescu watched from the stands due to a touchline ban before he makes his debut as coach when the team face VfB Stuttgart in the Europa League on Wednesday.

Poland midfielder Rybus, who turned 22 on the day of the match, gave Terek the lead on 30 minutes when he picked up a defense-splitting pass from Blagoy Georgiev in the box and put the ball into the far corner of Anton Shunin’s net.

Terek forward Ezechiel Ndouassel picked up a red card in only his second game for the team on 55 minutes after elbowing Vladimir Rykov.

Dynamo leveled the score 20 minutes later when Hungarian winger Balazs Dzsudzsak scored his first goal for the Moscow side with a lobbed finish after a perfectly weighted pass by Alexander Kokorin.

Six minutes later, Dynamo’s comeback faltered as Rykov was sent off for a last-man foul on Rybus, who promptly scored his second goal of the game from a free-kick on the edge of the box, curling a powerful effort around the wall.

In stoppage time, Dynamo’s German striker Kevin Kuranyi collected his second booking after an aerial clash with Terek’s Antonio Ferreira, who went down clutching his face despite Kuranyi making no contact with his head.

Dynamo dominated possession for much of the match but created few chances, and Georgiev could have scored twice in the first half.

On Saturday, a controversial late penalty from Dmitry Kombarov and a debut goal for Romulo gave Spartak Moscow all three points in a 2-1 win over Rubin Kazan, while Lokomotiv Moscow beat FC Volga 2-1 and FC Krasnodar and FC Rostov played out a 0-0 draw.