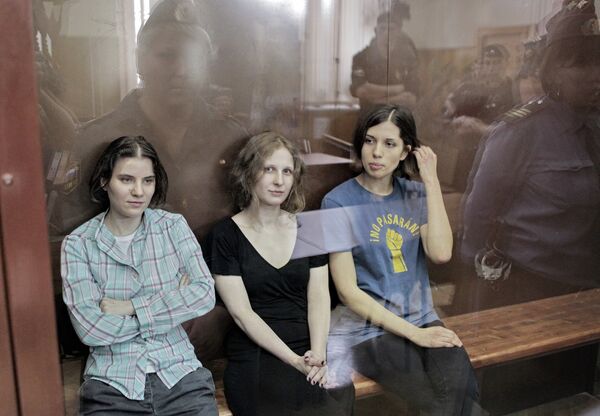 © RIA Novosti . Andrei Stenin
/
Go to the mediabank
Subscribe
International
India
Africa
Anti-Putin punks Pussy Riot were sentenced to two years each in a penal colony on Friday over a protest in Moscow’s largest cathedral, the decision sparking a demonstration outside the court and warnings of a growing divide in Russian society from opposition figures.

Anti-Putin punks Pussy Riot were sentenced to two years each in a penal colony on Friday over a protest in Moscow’s largest cathedral, the decision sparking a demonstration outside the court and warnings of a growing divide in Russian society from opposition figures.

Judge Marina Syrova ruled the three women’s February performance of a “punk prayer” urging the Virgin Mary to “drive Putin out” was “hooliganism aimed at inciting religious hated.” Only a jail sentence, she said, could “correct” them.

“Today the regime has both openly and cynically committed a criminal act,” opposition lawmaker Dmitry Gudkov told journalists outside the downtown Moscow court building, adding that the trial was an example of political “repression” that risked triggering “civil war.”

But the Orthodox Church appeared to seek a compromise after the sentence was announced, calling on the authorities to show “mercy” to the women. The Church had previously declined to issue a public appeal for the women’s release.

A White House spokesman called the sentence “disproportionate” and said the United States had “serious concerns about the way these young women have been treated by the Russian judicial system."

Police said they made “over fifty arrests” as protests took place outside the court after sentencing. A possible diplomatic incident arose after police chased a protester into the nearby Turkish embassy.

Defense lawyers for Nadezhda Tolokonnikova, 22, Maria Alyokhina, 24, and Yekaterina Samutsevich, 30, had said the performance was not anti-religion and was a response to Orthodox Church support for Vladimir Putin ahead of the March presidential polls that returned the former KGB officer to the Kremlin. The protest in the Christ the Savior Cathedral, where Russia’s leaders traditionally celebrate religious holidays, came amid the largest anti-government demonstrations in modern Russia’s history.

A host of Western and Russian celebrities had spoken out in support of the group in recent weeks, including ex-Beatle Paul McCartney and U.S. pop diva Madonna. High-profile figures from Russia’s arts world had also signed a letter calling for the women to be freed. The Kremlin’s own human rights council also called for their release and Amnesty International named them prisoners of conscience in April.

Putin said earlier this month he hoped the court would not judge the women “too harshly,” a comment that sparked a wide range of interpretations. The maximum possible sentence for the charges was seven years. Prosecutors had asked for three years for each of the defendants, two of whom have small children they have not seen since their arrests in March.

The three women were kept behind a glass screen for the duration of the trial at the reading of Friday’s verdict, which attracted massive international media attention.

Hundreds of the group’s supporters, many wearing their trademark colored balaclavas, chanted “Free Pussy Riot!” and “Down with the police state!” in the street outside as the court session began. Left Front opposition leader Sergei Udaltsov told the crowd that the judge and prosecutors would “burn in hell,” before he was quickly detained. Fellow opposition leader and chess grandmaster Garry Kasparov was also among those arrested. Police said Kasparov had bitten an officer as he was being led away.

“If we simply accept this and don’t do or say anything against it, that means we’re all Pussy Riot, and that any one of us can be next,” said protester Sergei Gubanov, 27, decked out in a green dress, yellow tights and bright red sneakers in a show of support for the women.

Famed crime novelist turned opposition figure Boris Akunin told reporters the authorities had created a political crisis for themselves by jailing the women and putting them on trial, and that instead of seeking compromise and dialogue, they were “turning one part of society against another.”

und guilty, she did not announce the sentence until after she had read out the entire text of the verdict, which took some three hours.

Alyokhina’s mother and Samutsevich’s mother were in the courtroom to hear the verdict and exchanged sad smiles with their children. Tolokonnikova, dressed in a t-shirt bearing the words “No Pasaran!” (“They shall not pass!”), smirked as the judge read out in detail the group’s insults against powerful Orthodox Church head Patriarch Kirill and Putin.

Cries of “disgrace!” sounded in the courtroom at the sentence was announced, but quickly died down. Pussy Riot joked among themselves as they waited to be led away to begin their sentences. Their lawyers said they would appeal.

Samutsevich’s father, Stanislav, told journalists outside the court that the sentence was “terrible” and the women “did not deserve a jail sentence.” Alyokhina’s mother declined to comment.

Reaction to the ruling was fast and furious. “The authorities have written their own sentence,” Pussy Riot lawyer Nikolai Polozov wrote in a Twitter post.

“Only the street can give an answer to this sentence,” wrote fellow defense lawyer Mark Feigin.

Tolokonnikova’s husband, Pyotr Verzilov, told journalists outside the court that "the only thing that can save my wife and our child is revolution." Verzilov is a member of the Voina art group, infamous for their protest stunts. "Voina" means "war" in English.

Opposition figurehead Alexei Navalny said outside the courtroom that the sentence was proof of the “destruction of the judicial system” and that anyone who failed to “stay quiet” also risked jail.

“They are jailing the girls to intimidate all other protesters,” said independent political analyst Dmitry Oreshkin. “The country is grinding to a halt in its [political] development, like Iran or Belarus.”

But lawmaker Vladimir Burmatov of the ruling United Russia party told the utro.ru website the sentence was “absolutely legally justified.”

Putin has not commented on Friday’s ruling.