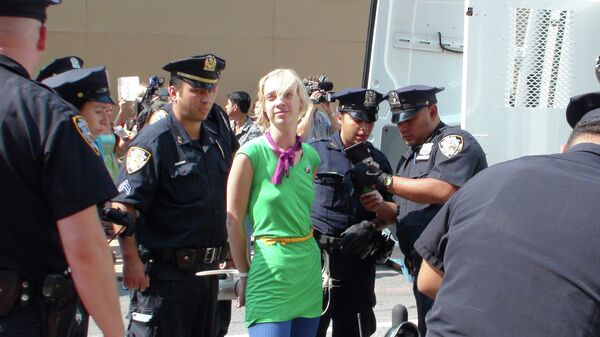 A handful of protesters gathered Friday outside the Russian embassy in Washington and denounced the verdict against three members of Russian feminist punk band Pussy Riot as an attack on free speech.

A handful of protesters gathered Friday outside the Russian embassy in Washington and denounced the verdict against three members of Russian feminist punk band Pussy Riot as an attack on free speech.

“We are here to tell Russia they need to drop these charges and let these women go free and stop this crackdown on free expression in Russia,” said Michelle Ringuette, chief of campaigns and programs for Amnesty International USA, one of about 15 demonstrators.

The three members of the group -- Nadezhda Tolokonnikova, 22, Maria Alyokhina, 24, and Yekaterina Samutsevich, 30 – were found guilty of “hooliganism” and inciting religious hatred. They were sentenced to two years in prison.

The three were arrested in March after they performed a song and dance act in protest against President Vladimir Putin on the altar of the main Russian Orthodox cathedral in Moscow in the presence of worshippers and members of the public present at the time.

The episode offended many in Russia but also ignited a firestorm of controversy in Russia and abroad about what sort of punishment the three women should receive as well as the relationship between the state and the church in Russia today.

“The church and government together – that is the problem,” said another protester outside the embassy in Washington, Vasily Sazonov, who is originally from St. Petersburg, Russia.

“The church has to think about how to change itself, and they have to live independently from the government,” Sazonov said.

Ringuette said the case against the Pussy Riot members had “galvanized a movement” and vowed that Amnesty International would continue to demand their release from prison.