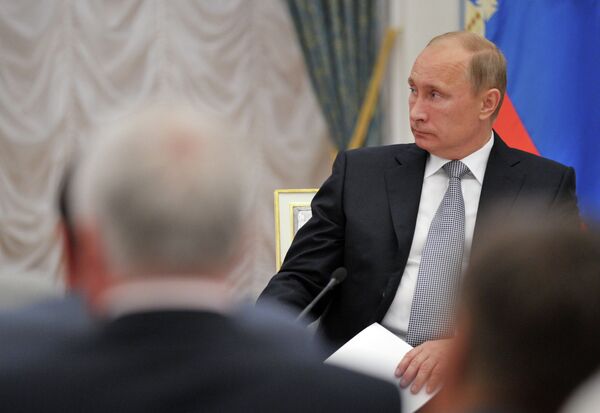 © RIA Novosti . Alexey Nikolskiy
/
Go to the photo bank
Subscribe
The Russian economy is prepared for a possible economic meltdown as a result of the slowing of global growth and the escalating eurozone debt crisis, President Vladimir Putin said on Thursday.

The Russian economy is prepared for a possible economic meltdown as a result of the slowing of global growth and the escalating eurozone debt crisis, President Vladimir Putin said on Thursday.

At a meeting with regional ombudsmen, Putin said the situation was complex both in the European and global economies.

“In the United States, the engine of the world economy, the situation looks better but macroeconomic indices that are vital for the economy’s sustainability are no better than in Europe. Their debt state [in the United States] is 104 percent [of U.S. GDP],” he said.

Aside from this, the U.S. financial system is burdened with mortgage loans issued against state guarantees, he said.

“All these factors cause certain alarm. Now news is coming that China’s economic development rates have slightly slowed and declined and China is one of the world’s largest consumers. These are, no doubt, alarming signals. Let us hope that these concerns do not transform into a full-blown crisis,” Putin said. “Let us hope for the better but prepare for the worse,” Putin added.

In 2011, the Russian government started to prepare anti-crisis measures to respond to unfavorable economic developments, he said.

“We also agreed to set aside quite a substantial sum for the start of next year in the 2013 budget as the government’s operational reserve, so that we can respond effectively and energetically to crisis factors, if they emerge,” Putin said, adding the Russian economy was currently demonstrating healthy parameters.

"We are currently checking the resilience of the federal budget, and holding stress tests to study its exposure to sharp changes in external economic conditions. We are calculating revenues to estimate their levels at an oil price of $80 per barrel or even $60 per barrel,” Deputy Finance Minister Alexei Lavrov said earlier this year.