Russian Activists to Sue Madonna for $10 Mln over Concert 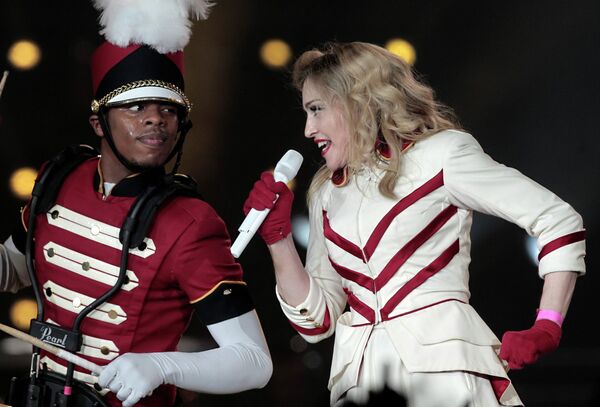 A group of Russian activists are preparing to file a $10.5 million lawsuit against U.S. pop diva Madonna over what they say was the “moral damage” caused during her recent concert in St. Petersburg.

A group of Russian activists are preparing to file a $10.5 million lawsuit against U.S. pop diva Madonna over what they say was the “moral damage” caused during her recent concert in St. Petersburg.

“We demand that she pay for moral damage suffered by St. Petersburg residents as a result of her actions during the show on August 9,” Daria Dedova said.

“We must defend our right to normal cultural life without propaganda of values and views that contradict the Russian culture,” she added.

Lawyer Alexander Pochuyev explained that the “moral damage” was a result of “psychological stress and emotional shock” experienced not only by those who attended Madonna’s show – during which he said the 53-year-old mother of four “trampled down” an Orthodox cross – but also by many internet users who have seen videos from the concert posted online and read news about the show.

“While speaking of tolerance, she abuses the feelings of believers,” the lawyer said.

Madonna should also bear responsibility for what his defenders believe was the “open promotion of homosexuality” during the concert, the lawyer said.

During her show at St. Peterburg’s largest concert hall, which was attended by 25,000 people, Madonna complained about a “growing intolerance” in the world and called for solidarity with gays and lesbians. She had pink armbands distributed in the audience and asked her fans to raise their hands in a sign of support for homosexuals. Madonna also spoke out in support of all-female group Pussy Riot. Three members of the band could be jailed on Friday over a February protest in Moscow’s largest cathedral against Orthodox Church support for Vladimir Putin ahead of the March 4 presidential polls that returned him to the Kremlin for a third term.

A group of activists from the St.Petersburg-based civil group Parental Control earlier asked police to probe Madonna’s actions, claiming that the concert was attended by children as young as 12 and accusing the singer of violating a local law prohibiting the promotion of homosexuality among minors.

The controversial law came into effect St. Petersburg in March and has been strongly criticized by rights groups.

Dedova said she believed that the activists’ move may prove successful. Although such suits are rare in Russia, “lawyers believe that we have a chance of winning… especially given that our cause is right,” she said.

The activists have pledged to spend the money they hope to receive from Madonna on charity projects for children and families.