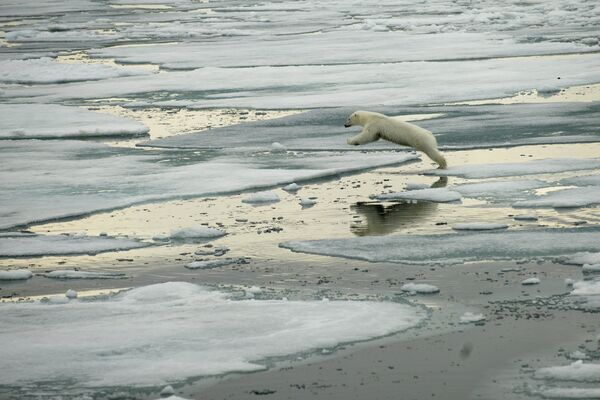 Saving the environment is a vital necessity, not a privilege, and Greenpeace is looking for a way to convince the Russian public about it, the head of Greenpeace International Kumi Naidoo said.

Saving the environment is a vital necessity, not a privilege, and Greenpeace is looking for a way to convince the Russian public about it, the head of Greenpeace International Kumi Naidoo said.

“The way environmental protection has been presented – if you’ve food in your stomach and a roof over your head, you get to worry about the environment, so it’s a luxury. And that needs to change,” Naidoo said in an interview on Tuesday.

“Take the Arctic. We can talk about it purely in terms of saving polar bears…But one has to go beyond that. Say, if you live in a coastal town – what’s happening in the Arctic is going to screw you up,” Naidoo said, with an energetic wave of ink-stained hands to drive the point home.

The Arctic was not brought up incidentally: environmental groups are mounting a drive to save the region’s fragile ecosystems from commercial exploration by oil and gas companies.

“The Arctic is the refrigerator of the planet, and the defining environmental challenge of our time,” Naidoo said in Moscow, where he co-presented a study on the risks of northern oil exploration commissioned jointly by the Russian branches of Greenpeace and the World Wide Fund for Nature (WWF).

The study showed that a potential oil spill off Russia’s northern coast in the northern Pechora Sea can cover an area the size of Greece.
Moreover, there are no technologies to clean up such a spill, WWF Russia head Igor Chestin said at the conference.

The study modeled consequences of a spill of 10,000 tons of oil. The spill is moderate compared to record-breakers such as the Deepwater Horizon disaster in the U.S. in 2010, where some 680,000 tons of oil spilled into the Gulf of Mexico, but would still suffice to pollute for decades much of the Pechora Sea and its coastal areas, including at least one nature reserve, experts said.

The Prirazlomnaya oil platform by Gazprom Neft Shelf has already been installed in the Pechora Sea and possibly began operating – though there is no way to know for sure, said Vladimir Chuprov of Greenpeace Russia.

The company is notoriously hard to contact, refusing or dodging most requests even about the platform’s most basic operations, said Chuprov, who supervises energy-related projects at the watchdog.

The platform’s state-approved contingency plan for oil spills expired in July, which means it is operating illegally, Chuprov said.

The platform’s oil spill response plan, cited by the environmentalists, lists a set of clean-up tools such as spades and axes – hardly enough to contain hundreds of tons of oil spewing out below the ice at minus 40 degrees Celsius on a polar night.

Greenpeace has focused on the worst-case scenario in its report, Gazprom Neft Shelf said in an e-mailed comment on Wednesday.

The Prirazlomnaya enlists oil spill response equipment, including containment booms and oil absorbents, and can count on the help of state agencies and other oil companies working in the area in case of a major spill, the company added. It did not comment on the allegations that the platform is operating illegally or that there are no technologies to efficiently clean up an oil spill in the Arctic.

‘Foreign Agent’ for the People

Getting Russian officials to discuss the matter is tricky: Naidoo, who met with then-President Vladimir Putin during his last visit to Moscow in 2006, said that this time he was given polite runarounds by all ministers contacted by Greenpeace.

He admitted to being skeptic about the Kremlin’s intentions, citing a recent restrictive piece of legislation on NGOs that may require Greenpeace to declare itself a “foreign agent.”

“Let's talk issues instead that affect the current and future generations, and [do this] not just through legislative intervention that's so backward it will actually embarrass Russia,” Naidoo said.

Greenpeace will not give up reaching out to the Russian authorities, but its primary focus will be on the general population, Naidoo said.
“Right now, we’re on our way to get the Russian people informed about the issue, active about the issue,” he said.

He admitted the group is still working out a strategy to hook the Russian public, which is indifferent toward the environment. During the presidential elections earlier this year, only 20 percent of respondents in a nationwide survey by the independent pollster Levada named ecology among their prime concerns, compared to 59 percent who were worried about communal utilities and 52 percent who cited inflation as a reason to worry. The poll covered 1,600 respondents and had a margin of error of 3.4 percentage points.

But Naidoo has a better chance of reaching out to the general public than many others, given his background in civil activism, starting with his participation in anti-apartheid campaigning in his native South Africa in the 1980s.

Naidoo was cautious about the group’s plans, but on Monday he held a two and a half hour Q&A session in downtown Moscow with the crème de la crème of Russia’s “creative class” – young educated urbanites who formed the backbone of recent anti-Kremlin street protests.

A Dash of Direct Action

But there may be more. Naidoo dodged the question about the possibility of direct protest action by Greenpeace in Russia, but conceded with a sly smile that the group “would make no apologies about acts of peaceful civil disobedience.”

He would know: in 2011, the South African-born activist personally braved Arctic waves twice his height in a light inflatable boat to storm an oil rig by British company Cairn Energy, ascending to the platform while sprayed by freezing water from a pump to hand over a petition to stop oil drilling in the region.

“Cold!” Naidoo blurts out when asked about his impressions from the trip. “But there was also the mind-blowing landscape, like something out of a fairytale.”

Naidoo spent several days in a Greenland prison with a severe cold after the stunt, but Cairn caved in to public pressure and wrapped up its Arctic operations – though now another company, Shell, is on its way drill for oil in Alaska and threatens legal action against environmentalists trying to throw a monkey-wrench into its operations.

The campaign is only picking up steam, Naidoo said, even though he conceded that the Arctic is not an easy place to mobilize the global movement around.

“When we were starting the campaign, my daughter told me, just call it ‘Save Santa Claus now,’” he said. “It's the only association people have with the place.”