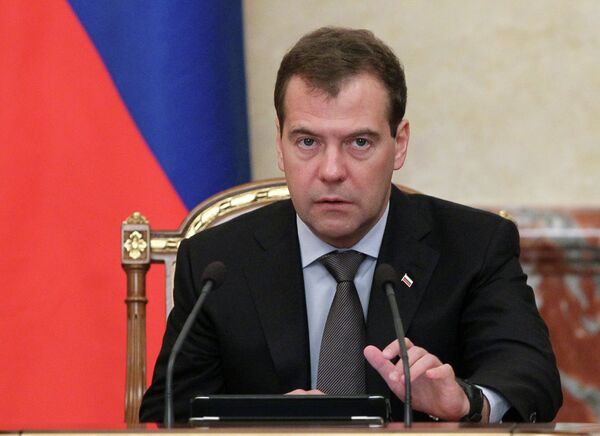 MOSCOW, August 14 (RIA Novsoti) – Russian Prime Minister Dmitry Medvedev ordered the government on Tuesday to work out a plan to improve Russia’s space industry organizations, after a string of mishaps that he said have compromised Russia’s image as a leading space power.

Russian Prime Minister Dmitry Medvedev ordered the government on Tuesday to work out a plan to improve Russia’s space industry organizations, after a string of mishaps that he said have compromised Russia’s image as a leading space power.

During a meeting with cabinet and space industry officials on Tuesday, Medvedev gave them one month to present proposals on “practical steps” to be taken to improve the federal space agency Roscosmos and tighten controls on spacecraft production.

There have been seven failed launches of Russian spacecraft over the past 18 months, which resulted in the loss of seven satellites, Medvedev said. The situation represents a major challenge for a country that carries out 40 percent of global space launches, he added.

“If you compare this to the results of other leading space powers, you will see a colossal difference, unfortunately,” Medvedev said, adding that “nothing similar to this has ever happened” in any other country with a well-developed space industry.

The most recent failure came on August 7, when Russia’s Proton carrier rocket launched from the Baikonur space center in Kazakhstan failed to deliver two satellites onto their designated orbit because of a suspected mishap in the engines of its Briz-M booster.

The satellites – Russia’s Express MD2 and Indonesia’s Telkom-3 – have been lost in space as a result.

However, those problems alone cannot account for the recent mishaps, he said.

“We should understand who is to blame for a series of recent failures and mistakes that have been made and establish the level of responsibility for those guilty,” Medvedev told the officials.

Currently, all costs of failed launches fall solely on insurance companies, while employees of spacecraft design and manufacturing companies who produce flawed parts and equipment do not bear any financial or other responsibility, he said.

He added that he was planning to make some relevant decisions as early as Tuesday.

The premier also noted that the Russian government was planning to invest some 650 billion rubles ($20.44 billion) in the country’s space industry by 2015.