100th Anniversary of Russian Air Force: What Are We Going to Fly? 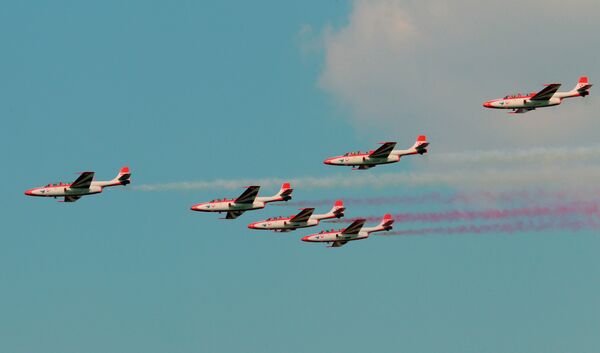 The Russian Air Force has turned 100. But what kind of aircraft are we going to fly in the future? That’s the question that worries military pilots across the world, especially in Russia.

The Russian Air Force has turned 100. But what kind of aircraft are we going to fly in the future? That’s the question that worries military pilots across the world, especially in Russia.

Fighter aviation is about the only thing that poses no problems. The Sukhoi Design Bureau made a huge leap forward in the 1990s.

The T-10 (Su-27) platform was creatively used by both Sukhoi “clans” (Mikhail Pogosyan at the Sukhoi Design Bureau and a plant in Komsomolsk-on-Amur and Alexei Fyodorov at Irkut) to release a family of sought-after Su-30MKI fighters, the Su-30MKK/MK2, which is similarly popular with foreign buyers, and a newly available Su-35 fighter jet. Having achieved recognition abroad, the Sukhoi manufacturers now have a bunch of export orders under their belt and stand ready to fulfill government contracts for the Russian Air Force.

The Su-35 tactical fighter will fill the niche for the new 4++ generation of ultimate fighters and reinforce the fleet of old and slowly modernized Su-27 fighters. Forty-eight aircraft have been commissioned and will be delivered through 2015. There is every reason to believe that the contract will be renewed after 2015. These fighters will go into mass production as soon as next year.

The Su-35 machines will come as a makeshift solution before the PAK FA fifth-generation fighters are fielded by the Russian Air Force around 2015. However, given the huge amount of innovation brought in by the PAK FA, it will take time before this aircraft is fully deployed and mastered.

Therefore, the purchase of approximately 100 Su-35 fighters will complete the transition period of the 2010s in a relatively painless manner.

The Su-30SM, a localized version of the Su-30MKI fighter currently exported to India, will serve as a second security blanket for the Russian Air Force. The Defense Ministry has commissioned 30 such aircraft recently. Last Wednesday, First Deputy Defense Minister Alexander Sukhorukov told the press that an additional contract for the supply of these all-purpose fighters was very likely.

The fate of still another 4 ++ generation fighter (MiG-35) is not yet clear. Contracts for the Su-35 and Su-30SM have been signed and work on them is underway, but the machine designed by the Mikoyan Bureau has been hanging thick in the air for the sixth straight year.

A major export contract could be instrumental in building the infrastructure for the serial production of the MiG-35, but it is difficult to sign one without an existing order from the Russian Air Force. Meanwhile, the Air Force itself seems wary and utters mysterious phrases like “we have not yet abandoned the idea of buying this aircraft.”

It is therefore quite possible that the planned purchase of these fighters will drown in vague promises, and a greater number of serial Su-35 fighters (including the PAK FA) will be purchased instead.

The fate of assault aviation is equally uncertain. On the one hand, the Air Force made ​​a bet on the modernized Su-25SM fighter version. On the other hand, according to Air Force Commander Viktor Bondarev, a new assault aircraft should become available in late 2010s and replace the modernized machines.

The production of the Su-25TM (Su-39) is still a possibility. The design of this fighter has been largely unified with the Su-25UBM dual control flight simulator, which is scheduled for production at the Ulan-Ude aircraft plant or the Sokol plant in Nizhny Novgorod. However, no concrete decisions have been made yet.

One hundred and twenty frontline Su-34 fighter bombers have been commissioned already. They will replace the aging Soviet Su-24 bombers and, according to the Air Force command, may be involved in long-range missions, such as carrying cruise missiles.

All of these aircraft will be retrofitted and their onboard equipment upgraded to increase their longevity in the Russian Air Force. The Tu-95 turned 50 without much wear to show for it and is well positioned to last another 50 years.

New weapons for the airborne arm of the nuclear triad are becoming available, but there are no new long-range bombers. There is a slow-moving PAK DA project, which, according to recent reports, has been put together in terms of technical requirements.

The debate about the future of the new strategic bomber has taken on a nervous tone recently.

Thus, in early June 2012 Deputy Prime Minister for Defense Dmitry Rogozin came down hard on the PAK DA project, saying that the Air Force didn’t need it and that long-range aviation should develop in unconventional ways. He didn’t provide his vision for such unconventional ways, though.

The Tu-160, Tu-95MS and Tu-22M do need to be replaced, and this issue has been discussed for a long time. The arguments made by Rogozin to support his view that this aircraft cannot make it past the layered anti-aircraft defense would make some sense in the 1950s - 1960s, but not in the era of long-range high-precision weapons.

Similar to the range of tasks that can be assigned to PAK DA, missions that can be assigned to a modern bomber are much broader as compared with the classic strategic bomber of the Cold War era. The need for the use of high-precision weapons in local conflicts and Russia’s vast territory pose specific requirements with regard to long-distance multi-purpose carriers of high-precision weapons.

Vladimir Putin ended the PAK DA discussions in a resolute manner. “This is a challenging scientific and technical task, but we need to start working on it. If we don’t do it right now, we will miss a lot,” the president said.

Geography is the main customer

Russia’s vast territory positively requires that it has well-developed military transportation aviation, especially amid cutbacks in the Armed Forces and attempts to give the army a “new look” – that is, to keep it mobile and in constant combat readiness.

One new-look mobile brigade should be able to replace several old units but it will be able to accomplish this only if it has proper transportation. Moving forces between theaters of operation on Russian territory can be done quickly only by air (provided the military equipment can be transported by air and adequate numbers of air strips are available). In other words, the focus on the military transportation aviation should be even greater now than in Soviet times.

Meanwhile the situation in the sphere of aircraft building remains extremely tense. Some experts indicate that the Russian aircraft industry is losing its competence in this area even in comparison with the Ukrainian Antonov Design Bureau, which isn’t in its best shape, either.  The Antonov Design Bureau was an established leader in military transportation aircraft in the Soviet Union.

The new version of the familiar heavy transportation aircraft IL-76 that was built in Tashkent in Soviet times has been deployed almost in full in Ulyanovsk. The first aircraft will take off in September. With certain reservations, this part of the program can be considered fulfilled.

When will airborne cabs become available?

The renewed production of super heavy-duty An-124 in Ulyanovsk is brought up often in conversations. However no one seems to be able to tell who, how and when this will be done. This excellent piece of equipment would certainly come in handy for the Air Force’s military transportation aviation.

The An-70 aircraft doesn’t seem to be able to find a place of its own at any of the  impoverished aircraft-making plants. This turboprop freighter is much needed by the Air Force. It has a short takeoff and landing and is capable of operating on poorly equipped airfields. There is a problem, though: its production is being reassigned back and forth between different plants.

The Air Force is test-flying two prototypes built by the Ukrainian Aviant plant operated by the Antonov Design Bureau. The list of complaints about the work done by Ukrainian designers is not getting any shorter. This story may reach the proportions of a soap opera.

But not the longest one, though. There is a wonderful tactical transportation aircraft project implemented jointly with India. Well, “implemented” may be an overstatement. At the moment, in addition to a decision on making 205 aircraft (of which 100 will go to the Russian Air Force), both sides have an IL-214 project now scheduled to take to the air in 2017.

Meanwhile, there is a competitor – the Ukrainian An-178. However, it has a problem, too: the transfer of the full production cycle to Russia meets with resistance from the Antonov Design Bureau, which would rather get an order for the manufacture itself than cede the license to Russian plants.

It is absolutely impossible to figure out what will become of the Russian military transportation aviation ten years from now in these circumstances. Run-down plants and design bureaus that have remained without work orders for the past 20 years (in stark contrast with the manufacturers of tactical aircraft, especially helicopters), preclude any chance of making plans for the future.