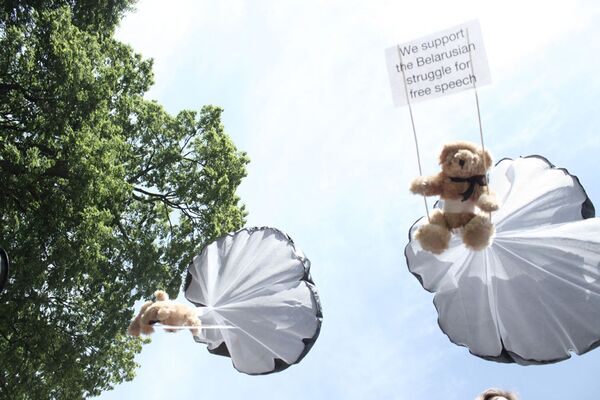 © Photo : Studio Total
Subscribe
Two Belarusian journalists have been found guilty and paid a fine of $360 for participating in a stunt that involved parachuting teddy bears, Minsk district court said on Thursday.

Two Belarusian journalists have been found guilty and paid a fine of $360 for participating in a stunt that involved parachuting teddy bears, Minsk district court said on Thursday.

On 4 July, a Swedish public relations company chartered a light aircraft which invaded Belarusian airspace to drop about 800 teddy bears with pro-democracy messages highlighting the lack of human rights in the former Soviet republic.

On Wednesday, photographer with Nasha Niva newspaper, Yulia Doroshkevich, and a correspondent from Komsomolskaya Pravda Belarus tabloid, Irina Kozlik, were detained in Minsk. They allegedly took photos with teddy bears in a gesture of support to two men - Anton Suryapin and Sergei Basharimov who were earlier arrested in relation with the teddy bear stunt.

Kozlik and Doroshkevich will pay a $360-fine for taking photos with the toy bears, according to the Minsk district court.

After the incident, President Alexander Lukashenko became enraged and sacked his air defense chief and head of border guards. He told their replacements not to hesitate to use force to stop any future air intrusions from abroad.

Following the stunt, the Belarussian KGB said in a statement on its Web site that two men, Anton Suryapin and Sergei Basharimov, had been detained on suspicion of complicity in the July 4 "illegal intrusion."

Suryapin, who is aged about 20, had earlier been identified as a blogger who was arrested after photographs of the toy bears were published on the internet.

Basharimov is said to be an entrepreneur who rented out an apartment to Studio Total, the Swedish PR company that allegedly stands behind the escapade.

Sweden said all of its diplomats have been expelled from Belarus, which has also closed the Belarusian embassy in Stockholm, the Huffington Post said.

European Union ambassadors will hold an emergency meeting on Friday on the issue, an EU source in Brussels told AFP.

"There will be an emergency meeting of the European Union ambassadors Friday to decide on appropriate measures," the source said on condition of anonymity, adding that the meeting would be held in Brussels.