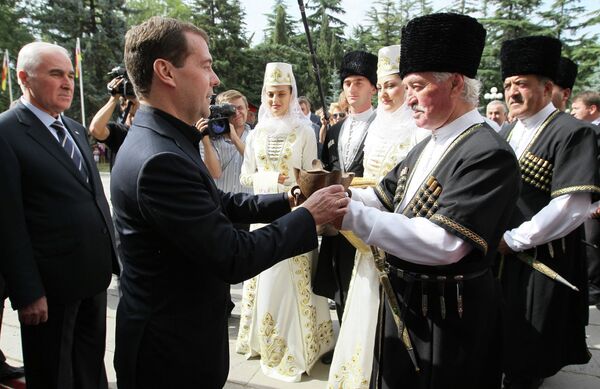 Russian Prime Minister Dmitry Medvedev said on Wednesday that his decision to repel the Georgian attack on South Ossetia in August 2008 was timely and efficient despite criticism expressed by some Russian generals.

Russian Prime Minister Dmitry Medvedev said on Wednesday that his decision to repel the Georgian attack on South Ossetia in August 2008 was timely and efficient despite criticism expressed by some Russian generals.

Former top-ranking generals in the Russian army have alleged that Medvedev’s indecision while he was president during the 2008 war with Georgia resulted in unnecessary loss of life.

“All the decisions were made exactly when they had to be made,” Medvedev told reporters in South Ossetia where he was on a visit to mark the 4th anniversary of the 2008 attack by Georgian forces, when they attempted to retake control over the de-facto independent republic.

“I made the decision two-and-a-half hours after the start of the Georgian assault,” Medvedev said. “Not too soon, because it would have been wrong as I dealt with the deployment of the Russian Armed Forces on the territory of the foreign state, but not too late either.”

“Those who say otherwise are either ignorant or are distorting the real facts on purpose,” he said.

The allegations against Medvedev appear in a 47-minute documentary, “The Lost Day,” which focuses on the events between August 7, when Russian forces reportedly became aware of Georgia’s plan to attack South Ossetia, and August 8, when Georgia attacked and Russia actually sent its forces into South Ossetia and Georgia.

A seven-minute preview of the film is posted on YouTube, with the headline, “Medvedev’s Cowardice Killed 1,000 People.” The film features several high-ranking generals, including former Chief of the General Staff of the Russian Army Yury Baluyevsky.

The former soldiers say Medvedev’s reluctance to issue the order a day earlier cost the lives of both Russian peacekeepers and local civilians. The conflict left 67 Russian servicemen dead while South Ossetian authorities estimate the civilian death toll at more than 1,500 people.