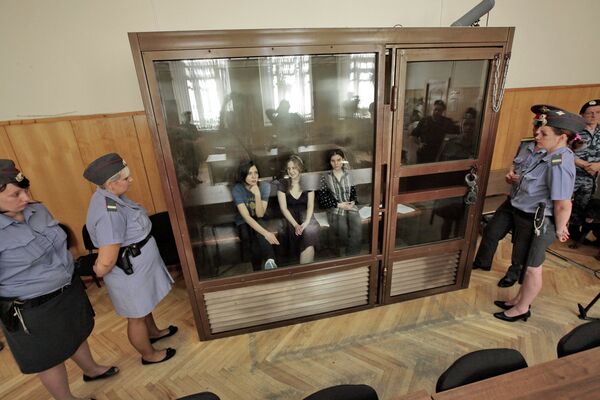 © RIA Novosti . Andrey Stenin
/
Go to the photo bank
Subscribe
The judge in the trial of three members of feminist punk band Pussy Riot has said she will deliver her verdict on August 17.

The judge in the trial of three members of feminist punk band Pussy Riot has said she will deliver her verdict on August 17.

A state prosecutor has asked for three years in prison for the three women.

Nadezhda Tolokonnikova, 22, Maria Alyokhina, 24, and Yekaterina Samutsevich, 29, were detained in March after five masked members of Pussy Riot performed a song in Moscow's Christ the Saviour Cathedral against what they said was church support for Russian leader Vladimir Putin's presidential election campaign.

The song, entitled "Holy S**t," featured the lyrics "Virgin Mary, drive Putin out!" and came amid unprecedented protests against the twelve-year rule of the former KGB officer.

A number of Western artists and politicians have voiced concern over the case.

The prosecution maintains the performance was aimed at offending the Orthodox Christian community, a claim denied by the Pussy Riot members who say their "punk prayer" was a political act.

Speaking to the court on the eighth day of hearings on Wednesday, they accused the court of carrying out a "political order for repression."

"This is not a trial of three Pussy Riot members, this is a trial of the entire judicial system," Tolokonnikova said in a long speech, to the applause of journalists and relatives assembled in the downtown Moscow courtroom.

"We are freer than the prosecution. That is why we can say what we want. They cannot even read out the words of the punk prayer," Tolokonnikova said.

U.S. pop star Madonna spoke out for the three women during a concert in Moscow on Tuesday night, becoming the latest global figure to support the trio.

She also wore a trademark colored balaclava and had the words Pussy Riot written across her back as she performed her 1984 hit Like a Virgin.