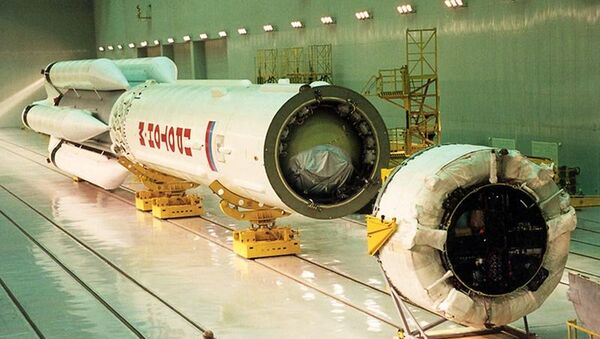 A Briz-M booster has failed to bring two satellites into a calculated transition orbit after the launch late on Monday, the Russian Federal Space Agency Roscosmos said.

Briz-M booster has failed to bring two satellites into a calculated transition orbit after the launch late on Monday, the Russian Federal Space Agency Roscosmos said.

Russia launched a Proton rocket with Briz-M booster carrying the Telkom-3 and the Express MD2 satellites at 11.31 p.m. Moscow time [19:31 GMT] from the Baikonur space center in Kazakhstan.

“The Briz-M booster and the two satellites have not been detected on the transition orbit,” Roscosmos said in a statement on its website. “The signal from the booster has been received from an interim emergency orbit, instead.”

According to preliminary data, Briz-M fired engines at a scheduled time, but they worked only for seven seconds rather than the programmed 18 minutes and 5 seconds.

“The chances that the satellites will separate from the booster and reach the designated orbit are practically non-existent,” a space industry source told RIA Novosti.

He added that the launches of Proton rockets with Briz boosters would most likely be suspended until experts determine the cause of the failure  and the launch schedule would be adjusted accordingly.

For now, he said, the booster has become a potentially hazardous piece of space junk.

However, a source from the mission’s control center outside Moscow told RIA Novosti there was no threat to the International Space Station.

“No avoidance maneuvers are being planned for now,” the source said.

The malfunction of a Briz-M booster led to the loss of the Express-AM4 telecommunication satellite in August 2011.

Telkom-3 satellite has been built by Russia’s Reshetnev space company with its communication equipment made by Thales Alenia Space. It has a capacity of 42 C- and Ku-band active transponders to provide telecoms services for Indonesian customers.

This is the first time Indonesia has bought a satellite from Russia.

The Express MD2 is a small communication satellite, designed and manufactured by the Khrunichev State Research and Production Space Center for the Russian Satellite Communications Company(RSCC).