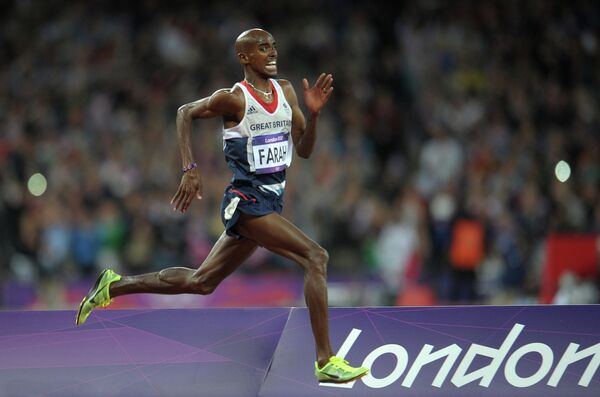 Mo Farah became the first Briton to win gold in the Olympic 10,000 meters on Saturday, kicking home in the final straight to shake off the challenge of defending champion Kenenisa Bekele.

Mo Farah became the first Briton to win gold in the Olympic 10,000 meters on Saturday, kicking home in the final straight to shake off the challenge of defending champion Kenenisa Bekele.

Farah, 29, hit the front on the bell and put in a burst of speed in the last 100 meters to send the home crowd into raptures, clocking 27 minutes, 30.43 seconds.

Ethiopa's Bekele, who was trying to become the first man to win three Olympic golds over the distance, finished fourth, behind surprise U.S. runner Galen Rupp and his brother Tariku.

"I can't believe it. The crowd was getting louder and louder," Farah said.

"My legs were getting tired, the crowd gave me a boost," he added.

Farah trains with Rupp, and took particular pride in his achievement.

Apparently, it was mutual.

"I'm thrilled for Mo," said Rupp. "It's unreal. Two training partners coming in first and second, I couldn't be happier. I wouldn't be where I am today without him."

The Ethiopians Gebregziabher Gebremariam and Tariku Bekele tried to take control of the race with three laps remaining, but they were unable to shake off the pack, and Farah in particuar.

Kenenisa Bekele, one of history's greatest distance runners, looked to be the greatest challenger to Farah for most of the race, but faded badly in the final straight.

"It didn't go as we planned it," Tariku Bekele said. "We didn't want the race to be fast from the beginning."

"I am really disappointed as we [Ethiopians] didn't win gold medal. But I have to thank God for the bronze medal."

It was a third British athletics gold in the space of two hours, with Jessica Ennis winning the heptathlon and Greg Rutherford leaping to the long jump gold.