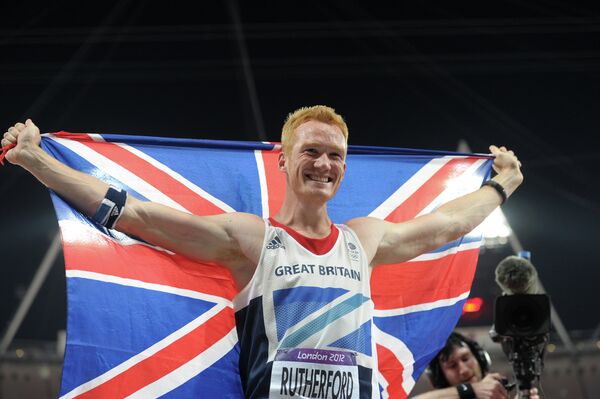 Rutherford claimed the gold when Will Claye of the United States, the only man who could have caught the Briton, fouled his last attempt.

Mitchell Watt jumped 8.16 to take the silver for Australia, with Claye winning bronze with 8.12.

"It's the most amazing feeling in the world," Rutherford said.

"Four years ago I had a terrible time, my gran died, but now I have amazing team. My coach is incredible."

"I don't think it's sunk in properly," he added.

The winning jump was four centimeters short of Rutherford's own world-leading time this year.

It was Britain's second gold in 20 minutes after Jessica Ennis won the 800 meters to take the top prize in the women's heptathlon.

Watt, the world silver medalist, said he tried every method conceivable to sum up what was needed for a gold medal jump.

"It was just going through my head some of my better jumps, my Australian record," he said.

Watt's best jump came as Ennis was running to gold in the heptathlon, winning the 800 meters that sealed the crown.

"I just pretended I was British for about 30 seconds," he laughed.

Claye, 21, a triple jump specialist, said the disappointment of third place only motivates him more for his main event.

"I went for the gold. It pumps me up more for the triple jump now. I'll come back stronger. It's a blessing to be here."