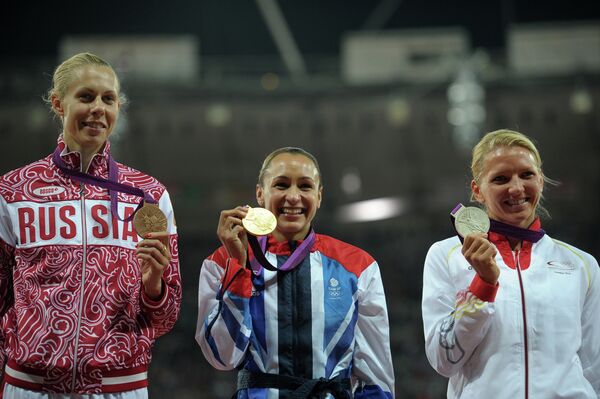 Ennis had a virtually unassailable lead of 184 points going into the middle-distance finale after a 6.48 meter long jump and a personal best in the javelin of 47.49 meters.

Ennis thrust her arms into the air as she crossed the line, then falling to the track and bursting into tears; the enormity of the achievement in front of her home fans too much to take.

"After javelin, I didn't let myself believe it. After all the hard work and disappointment of Beijing, everyone has supported me so much," she added, referring to the foot injury that obliterated her 2008 season.

"They said 'go for another four years,' I've done that."

Ennis, 26, is the first Briton to win the heptathlon since Denise Lewis in Sydney 12 years ago.

"I'm going to savour the moment. I've had great support, although I have been under a huge amount of pressure," Ennis said.

Tatyana Chernova of Russia thought she had the silver with 6,628 when Germany's Lilli Schwarzkopf was disqualified from the 800 meters for a lane infringement after finishing fourth.

But after a verbal protest from the German coaches, the result was allowed to stand and Schwarzkopf overtook Chernova by a mere 21 points.

That bumped Lyudmila Yosypenko of Ukraine off the podium.

A Ukrainian appeal was rejected.