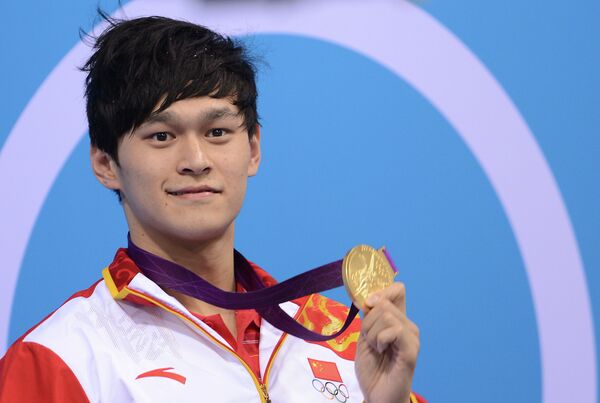 Chinese world champion Sun Yang steamed to gold in the 1,500 meters freestyle on Saturday, lopping a massive three seconds off his own world record.

Chinese world champion Sun Yang steamed to gold in the 1,500 meters freestyle on Saturday, lopping a massive three seconds off his own world record.

The 20-year-old star stayed a body length ahead of the world record for most of the 30 lengths, winning in 14 minutes, 31.02 seconds.

It's Sun's second gold of the Games after he beat defending champion Park Taehwan in the 400 meters freestyle last Saturday.

"I think it's really good and I have achieved my objectives. Not only me, but my coach and my parents have put a great deal of effort into this result," Sun said.

He was then asked about the floods of tears that followed the victory.

"Maybe you don't understand. I really, really wanted to get this gold medal."

Ryan Cochrane of Canada, the Beijing bronze medalist, staved off defending champion Oussame Mellouli of Tunisia to take the silver in 14:39.63.

"This is the happiest I've been after any race of my career," said Cochrane. "Surprising swims are usually the best, but this wasn't surprising at all. This is what I'd planned for."

Mellouli, who clocked 14:40.31, said he was wary of the reaction of his legions of fans back home.

"I hope they won't be disappointed by bronze. After all, I am the defending champion," he said.

"People need to realise how hard it is to get back on the podium after four years."