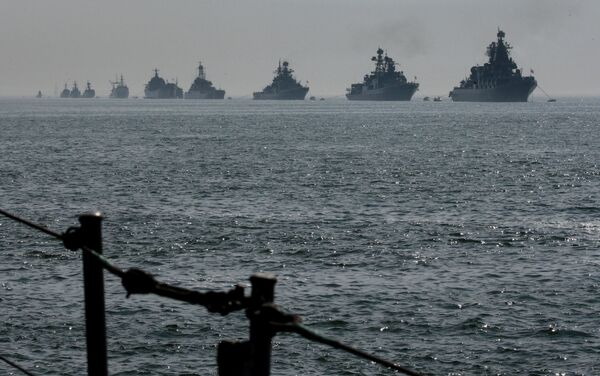 Russian warships engaged in drills in the Mediterranean Sea may enter Russia’s naval re-supply and maintenance base in Syria’s Tartus, the Russian Defense Ministry said on Friday.

Russian warships engaged in drills in the Mediterranean Sea may enter Russia’s naval re-supply and maintenance base in Syria’s Tartus, the Russian Defense Ministry said on Friday.

Russian media reported earlier this week that three large landing ships from the Russian flotilla are planning to make a port call in Tartus. Earlier on Friday, the Russian Defense Ministry said the port call was unnecessary and “not planned.”

Later in the day, the ministry said that the schedule of the flotilla’s mission might be extended to include entry into the Black Sea, and the ships will have to replenish stocks.

"The [naval] command will plan re-supplying the ships’ stocks either via support vessels or via Russia’s material and technical support base in Tartus,” the Defense Ministry said.

Black Sea Fleet Commander Rear Admiral Alexander Fedosenkov said last week Russian warships in the Mediterranean are preparing for naval drills due in September, and are not carrying out any military tasks in Syria.

The Russian flotilla comprises five warships from the Northern and Baltic fleets, plus escort vessels. On Saturday a group of Northern Fleet vessels, led by the Vice Admiral Kulakov destroyer, will join the flotilla.

The Tartus base, Russia’s only naval facility outside the former Soviet Union, is used for repair and refueling of warships. The Russian Navy needs the base to support Russian warships in the Mediterranean, as well as those on anti-piracy missions in the Gulf of Aden and the Indian Ocean.