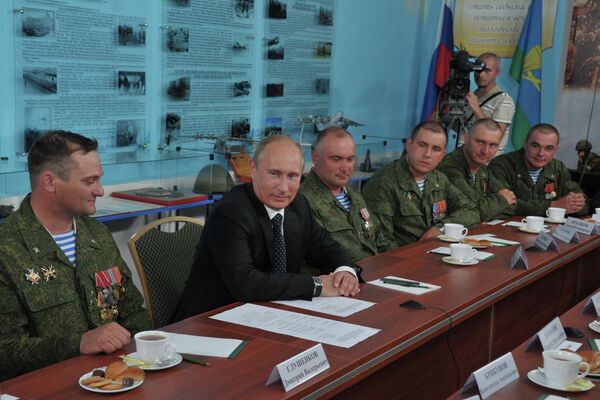 Russian President Vladimir Putin reaffirmed on Wednesday that Russia would continue its support of the NATO military operation in Afghanistan to ensure order and security in the troubled Central Asian country.

Russian President Vladimir Putin reaffirmed on Wednesday that Russia would continue its support of the NATO military operation in Afghanistan to ensure order and security in the troubled Central Asian country.

“NATO maintains a permanent presence in Afghanistan at present. We should help them. Let them keep fighting there," Putin said at a meeting with the personnel and veterans of Russia's Airborne Troops.

Flooded by Afghan heroin being smuggled through former Soviet Central Asian republics, Russia has cooperated with NATO in fighting the drug business in Afghanistan for years, helping to carry out raids on drug laboratories and training anti-drug officers.

The president reiterated, though, that Russia would not send troops to take part in the military operation against Taliban fighters.

“I realize that, if something breaks out that requires the involvement of our Armed Forces and you - the paratroopers, you will be ready,” Putin said. “But it’s our job, the politicians, to prevent such events from occurring.”

Russia has also made significant contributions to support NATO ground and air cargo transit into and out of Afghanistan and recently agreed to host a NATO transit hub in Ulyanovsk to facilitate NATO withdrawal from the war-torn country by 2014.

In addition, Moscow signed a $367.5-million deal in 2011 with the U.S. Department of Defense for 21 Mi-17V5 transport/attack helicopters to expand the fleet of helicopters in service with the Afghan military.

Putin expressed concern over security in Afghanistan after the withdrawal of NATO troops from the country and urged NATO members to bring to a logical conclusion all the tasks that the Western coalition has committed to accomplish before the pullout.

“If they have made the commitment, let them follow through on it," the Russian president said.