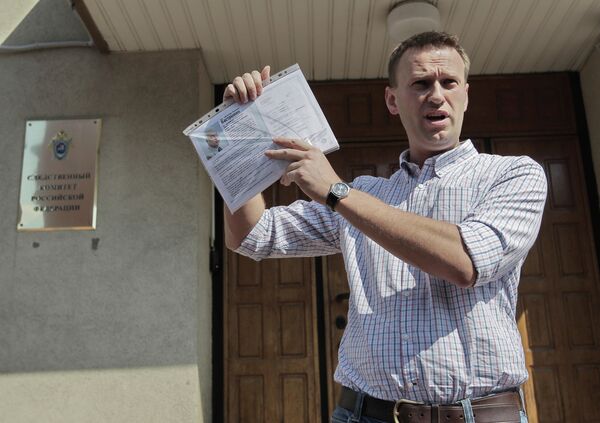 Russian opposition figurehead Alexei Navalny was charged on Tuesday with embezzlement and ordered not to leave Moscow, the Investigative Committee said.

Russian opposition figurehead Alexei Navalny was charged on Tuesday with embezzlement and ordered not to leave Moscow, the Investigative Committee said.

“Alexei Navalny has been charged in a crime under Article 160-3-33 of the Russian Criminal Code (organizing embezzlement on a grand scale),” committee spokesman Vladimir Markin said.

Another two persons will shortly be charged in the case, Markin added.

Navalny said he asked the Investigative Committee to allow him to go on vacation.

“They told me they would consider my request but most likely would not let me go,” he told reporters after emerging from the investigator’s office, adding that he had shown them his vacation tickets for himself and his family.

The blogger said he was initially accused of causing one million rubles (around $30,000) in damage but now the charge has been redefined as “acting in criminal collusion” and the figure was upped to 16 million.

He described the new charges as “mega-strange” while the figure of 16 million rubles was plucked out of thin air, as the investigators offered no explanation of where that number came from.

Navalny’s lawyer, Vadim Kobzev, said his client does not believe he has done anything wrong.

Navalny, a corruption-fighting lawyer, is suspected of pressuring the state-run Kirovles timber company in the Kirov Region into a disadvantageous deal when he was a pro bono advisor to Governor Nikita Belykh in 2009. Navalny faces up to five years in prison if convicted.

Later in the day Navalny challenged the reopening of the “Kirovles case” at Moscow’s Basmanny District Court, his lawyer said.

The court has yet to set the date for an appeal hearing.

The case was dropped by regional investigators in April, but reopened in July on orders from Investigative Committee chief Alexander Bastrykin.

The move came shortly after Navalny accused Bastrykin of professional misconduct, including threatening a Novaya Gazeta journalist in June. He also accused the country’s chief investigator of fraud and corruption, as well as of being a “foreign agent.”

The term “foreign agent” was in reference to a controversial draft law that would force non-governmental organizations that receive money from abroad and are engaged in politics to use the term on all their publications and websites. The bill was signed into law by President Vladimir Putin last Saturday and went into effect immediately.

Navalny also alleged that Bastrykin had concealed real estate and business interests in the Czech Republic and held EU residency while enjoying access to state secrets.

In 2007, Bastrykin was appointed head of the Russian Investigative Committee.
Under Russian law, state and government officials may not engage in any commercial activity.

Navalny, the founder of the anti-graft website Rospil and shareholder rights campaigner, is one of several activists being investigated in relation to clashes between protesters and police on eve of President Putin's May 7 return to the Kremlin for a third term. He spent 15 days in jail in May on protest-related charges.

Anti-corruption blogger Navalny has sought in the past few years to obtain documents via court rulings from a number of state-run companies, in a bid to make their activities transparent. As a minority shareholder in state-run oil major Rosneft, Navalny attempted to get the company’s minutes of board meetings for 2009, and also copies of agreements on crude oil supplies to China.

Navalny has also been a leading figure in the protest movement which emerged in Russia after last year's parliamentary elections. Rosneft President Igor Sechin has accused Navalny of working for London-based Hermitage Capital, the company at the center of the Magnitsky scandal, a charge he denied.