Russia May Evacuate Personnel from Its Syria Base – Navy Chief 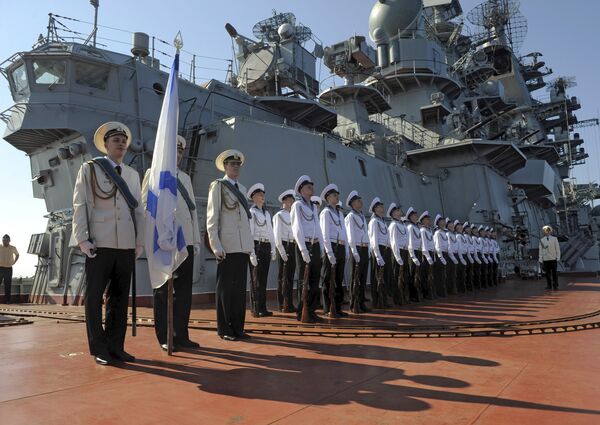 © RIA Novosti . Grigori Sysoev
/
Go to the photo bank
Subscribe
Servicemen may be evacuated from the Russian naval base in Tartus, Syria, if it comes under attack, Navy chief Vice Adm. Viktor Chirkov said on Saturday.

Servicemen may be evacuated from the Russian naval base in Tartus, Syria, if it comes under attack, Navy chief Vice Adm. Viktor Chirkov said on Saturday.

“I am not the one to issue orders: We have the defense minister [for that],” he said in an interview with Ekho Moskvy Radio. “If we have to evacuate the personnel that is currently deployed there, we certainly will.”

He stressed that an order by the commander in chief of the Russian Armed Forces (the president) and Russia’s top political leadership was required for that.

Chirkov said on Monday Russia has no plans to abandon its naval base in Tartus.

The Russian Navy needs the base to provide maintenance and technical support to Russian warships in the Mediterranean, as well as those on an anti-piracy mission in the Gulf of Aden and the Indian Ocean, he said.

Russia has repeatedly denied media reports that it was sending warships to Syria and delivering weapons to the Middle Eastern country.

Black Sea Fleet commander Rear Admiral Alexander Fedosenkov said on Thursday Russian warships in the Mediterranean are preparing for naval drills due in September, and are not carrying out any military tasks in Syria.

The Russian flotilla comprises 10 warships, plus escort vessels. Chirkov said previously the Russian warships would not dock at Tartus.