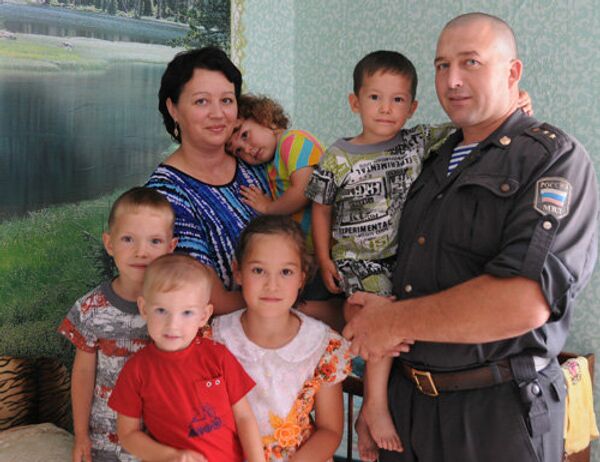 A policeman in Russia’s Altai Territory has adopted two children whom he rescued from starvation in their home, the web site of the Interior Ministry said on Friday.

Three-year-old Maxim and his younger brother Dima had never seen their father and their mom did not take very good care of the boys, frequently leaving them home alone for days at a time.

But this spring a concerned neighbor called police when their mother had been absent for six days.

Police established that there was no heating in the home and the brothers had only a small loaf of stale bread to eat. Maxim would wrap his younger brother up in several futons to keep him warm.

Sergei Sharaukhov, one of the policemen who arrived at the scene, was shocked by the boys' plight: “When we got inside, my heart sank."

"I’ve seen a lot in my time, but this was too much! One of the windows in this house was broken; Maxim stuffed rags in it to stop the draft. It flashed into my mind: I’ll take them with me!”
Sharaukhov, a former member of the riot police who served at hotspots on four different occasions, asked the boys whether they would like to come with him: “Tears welled up when Maxim yelled: 'Daddy, why didn’t I recognize you earlier!'”

Maxim and Dima were first taken to hospital for medical examination. Sergei called his wife Yelena, with whom they are raising their own four children, and the next morning they arrived at the hospital with toys, fruits and clothes to tell they boys that they would adopt them.