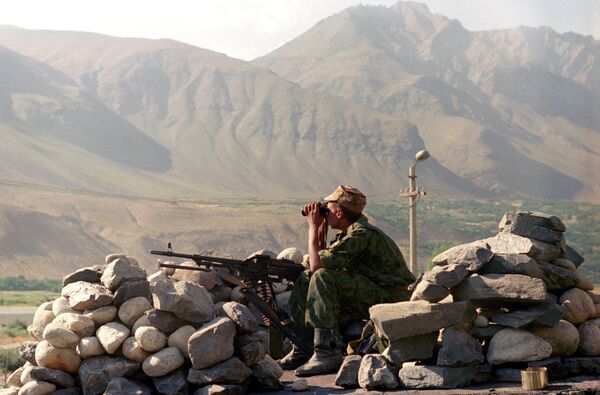 © RIA Novosti . Semiryaga
/
Go to the photo bank
Subscribe
The Russian Foreign Ministry on Friday advised citizens to avoid or defer travel to Tajikistan’s Gorno-Badakhshan Autonomous Region which has been hit by a controversial armed conflict.

The Russian Foreign Ministry on Friday advised citizens to avoid or defer travel to Tajikistan’s Gorno-Badakhshan Autonomous Region which has been hit by a controversial armed conflict.

On Tuesday, Tajik security officials reported that 30 militants, including eight Afghan citizens, were killed and 40 were detained during a security operation in the southern Tajik region bordering Afghanistan. The operation was conducted against a mafia-style group believed to be behind the murder of Abdullo Nazarov, chief of the Tajikistan National Security Committee, who was killed on July 21. The operation also left 12 security officers dead and 23 injured, according to official reports.

But Tajik opposition activists claim that the conflict was actually an attempt by President Emomali Rakhmon to suppress opposition in the region. They have accused Tajik authorities of using Nazarov’s murder, and the recent attacks on government officials, as a pretext for an ethnic cleansing campaign, and an attempt to re-establish control over the region which has long been known as a fiefdom of local warlords.

Opposition media reports said earlier this week an estimated 200 people, both civilians and security officials, had been killed in the operation. Dushanbe denies any civilian casualties.

The Gorno-Badakhshan region remains volatile 15 years after a civil war between the Moscow-backed government and an Islamist-led opposition, in which up to 50,000 people were killed. The five-year war ended in 1997 with a United Nations-brokered peace agreement.

The Tajik activists have sent a letter to Russian President Vladimir Putin asking him to help resolve the conflict.

Russia is “the only authoritative force that can influence the situation and call the opposing sides to dialogue,” activist Ikbolsho Muborakshoyev was quoted by Russian RBC daily as saying on Thursday.

The Russian Foreign Ministry said on Wednesday it was concerned over “acts of violence against representatives of state authorities” in Tajikistan which forced the launch of the operation in Gorno-Badakhshan.

The ministry expressed hope that “the leadership of friendly Tajikistan will be able to take the situation under solid control, restore public order and the rule of law in the region.”

But Muborakshoyev said on Thursday the activists were looking for more from Russia.

“Unfortunately, the official position recently announced by the Foreign Ministry is unacceptable for us since it supports the government’s actions,” he said, adding that talks between the government and opposition launched on Wednesday have little chance of success because the government is pressuring the opposition.

Putin has yet to respond to the appeal.

In its Friday statement, the Russian ministry noted that border crossings between Tajikistan and Afghanistan may have been closed because of the conflict.