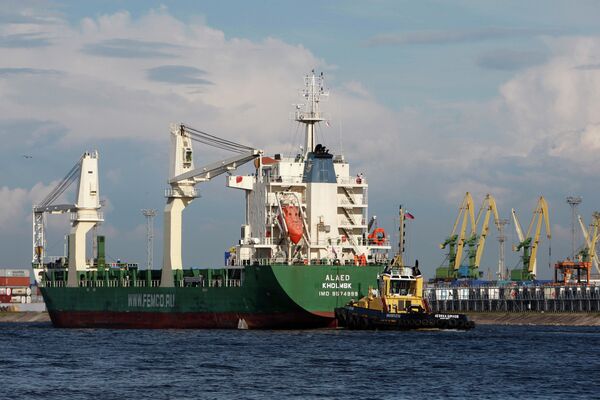 © RIA Novosti . Вадим Жернов
/
Go to the photo bank
Subscribe
The Russian arms ship at the center of a diplomatic row between Russia and the West is loading up with a new unknown cargo at the St. Petersburg port.

he Russian arms ship at the center of a diplomatic row between Russia and the West is loading up with a new unknown cargo at the St. Petersburg port, according to a bulletin posted on the port’s website on Tuesday.

The Alaed docked at St. Petersburg on Friday after offloading Mi-25 helicopters in the Russian port of Baltiysk in the Kaliningrad region

There has been no word from the ship’s owner, Femco, about the nature of the new cargo.

Femco previously said the documentation accompanying the cargo did not contain any data linking it to Syria.

The Alaed originally set sail from Baltiysk in June, reportedly carrying three Mi-25s and some air defense systems. The ship turned back to Russia later that month, after its insurance cover was suspended by its British insurer, Standard Club. It later turned back and entered the port of Murmansk, and was later re-flagged as a Russian registered vessel.

A Defense Ministry spokesman said on Tuesday warships from Russia’s Baltic and Northern Fleets have passed through the Strait of Gibraltar and entered the Mediterranean, where they will team up with Black Sea Fleet ships for an exercise.

According to some media reports, in the course of the exercise they may call at the Syrian port of Tartus.

Vyacheslav Dzirkaln, deputy head of Russia's military technical cooperation agency, said recently Russian warships will be sent to defend Russian merchant shipping in the event of a blockade due to the situation in Syria.

The U.S. Congress voted to break off all contacts with Russia's state arms corporation Rosoboronexport on Thursday over concerns about Russia continuing to supply arms to Syria. Russia has maintained it is only fulfilling contracts signed before the current wave of unrest in Syria, and said last week it will not supply a batch of Yak-130 advanced jet trainers to Damascus.