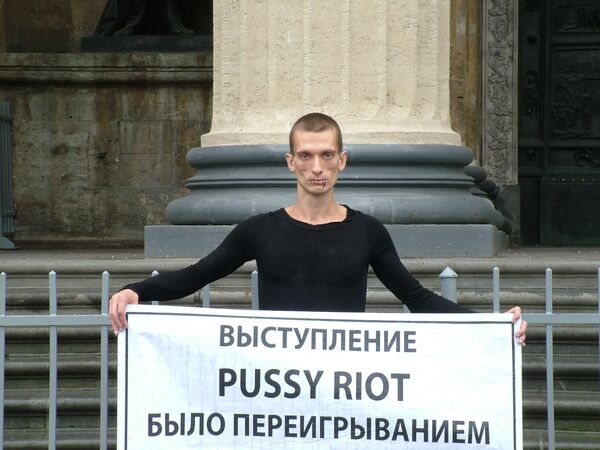 A painter has stitched his mouth closed in Russia's second city of St Petersburg to protest the trial of three women from the Pussy Riot punk group.

A painter has stitched his mouth closed in Russia's second city of St Petersburg to protest the trial of three women from the Pussy Riot punk group.

Pyotr Pavlensky, who held his one-man protest late on Monday outside the city's Kazan cathedral, says that the arrest of Pussy Riot members contradicts the fundamental Christian values as the group’s performance in Moscow’s landmark Christ the Savior cathedral was a reenactment of Jesus Christ’s “cleansing of the temple.” (Matthew 21:12-13)

The painter was taken to an emergency room at a hospital for a psychiatric examination and was later released with “a clean bill of mental health.”

Pavlensky told RIA Novosti after taking the stiches out that his performance “demonstrated the government’s clampdown on the freedom of expression and growing censorship in art and media in Russia.”

Members of Pussy Riot - Nadezhda Tolokonnikova, 23, Maria Alyokhina, 24, and Yekaterina Samutsevich, 29, - were detained performing a song in Moscow’s largest cathedral in late February against what they said was church support for Vladimir Putin’s presidential election campaign.

The three women have been charged with hooliganism as part of an organized group and could face up to seven years in jail.

A Moscow city court on Friday ruled to prolong their custody for another six months.

Over the weekend, the group got public encouragement from two rock bands - Franz Ferdinand and the Red Hot Chili Peppers, which held performances in Russia.