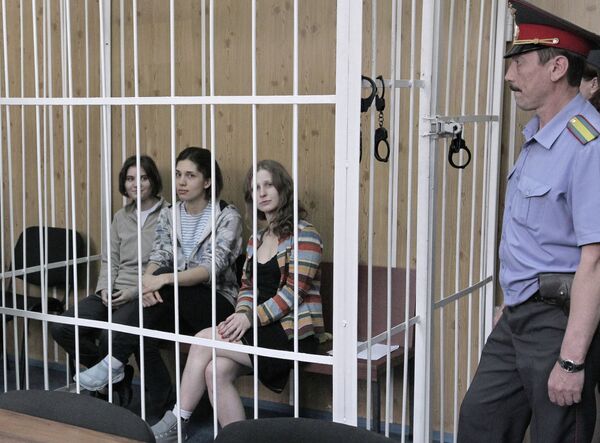 © RIA Novosti . Andrey Stenin
/
Go to the photo bank
Subscribe
A Moscow court ruled on Friday to prolong custody of three women from the Pussy Riot punk group for another six months ahead of their trial on charges related to an anti-Putin protest.

A Moscow court ruled on Friday to prolong custody of three women from the Pussy Riot punk group for another six months ahead of their trial on charges related to an anti-Putin protest.

“We will appeal the ruling,” lawyer Nikolai Polozov told RIA Novosti after the court had extended custody until January 12, 2013.

The group’s defense team has accused the courts of fulfilling a “political order” and asked on Friday for President Vladimir Putin and the head of the Russian Orthodox Church, Patriarch Kirill, to be summoned as witnesses.

Police detained four people as supporters and critics of the group rallied outside the court, reported the ovd.info.org website, which monitors protest-related arrests in Russia.

The three suspects, Nadezhda Tolokonnikova, 23 Maria Alyokhina, 24, and Yekaterina Samutsevich, 29, have been in pre-trial custody since March and could face up to seven years in jail.

They were detained after four masked members of Pussy Riot performed a song in Moscow’s largest cathedral in late February against what they said was church support for Vladimir Putin’s presidential election campaign.

The song, entitled “Holy S**t,” featured the lyrics “Virgin Mary, drive Putin out!” and came amid unprecedented demonstrations against the twelve-year rule of the former KGB officer. The suspects admit being part of the Pussy Riot group, but say they did not take part in the protest in the landmark Christ the Savior cathedral. Putin called the protest “unpleasant.”

The group members have been charged with hooliganism as part of an organized group.

While a number of figures within Russia’s influential Orthodox Church have expressed disquiet at the continued detention of the suspects, Church head Patriarch Kirill criticized in March those believers he said were seeking leniency for the group.

And leading Church official Vsevolod Chaplin said last month that God had revealed to him his displeasure over the protest. “This sin will be punished in this life and the next,” Chaplin cited God as saying.