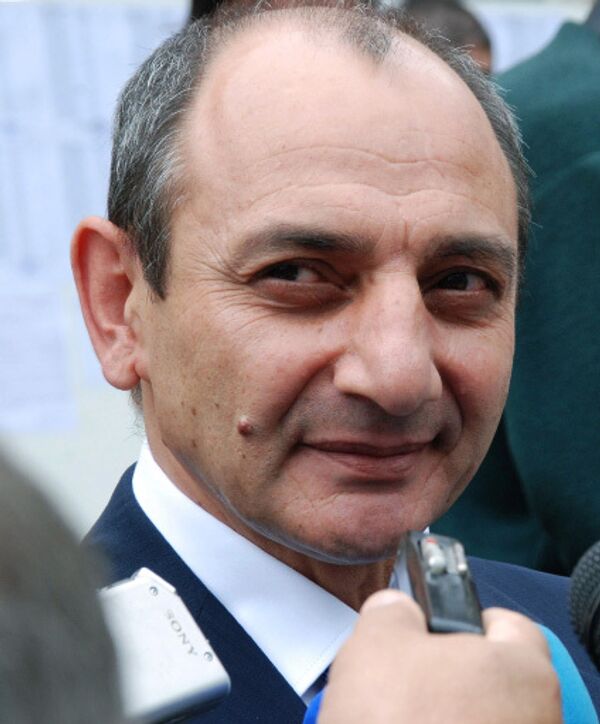 The voting turnout reached over 73 percent. All in all, 72,833 people out of the country’s 98,909 registered voters casted their ballots.

The voting process was overseen by more than 60 monitors from Russia, Armenia the United States and other countries.

On Friday, Georgia’s Foreign Ministry said it will not recognize the elections. “The Foreign Ministry of Georgia declares its unequivocal support for the sovereignty and territorial integrity of Azerbaijan and does not recognize so-called "presidential elections", conducted in Nagorno-Karabakh July 19 2012,” an official ministerial statement said.

Georgia believes that more effort is needed from the international community "to achieve a peaceful settlement of Nagorno-Karabakh conflict through constructive dialogue," the statement added.

On Thursday, the EU has reiterated it does not recognize the legality of the elections.

Catherine Ashton, the EU high representative for foreign affairs and security policy, said the European Union “does not recognize the constitutional and legal framework in which they will be held.”

“These 'elections' should not prejudice the determination of the future status of Nagorno-Karabakh in the negotiated general framework of the peaceful settlement of the conflict.”

Ashton recalled the EU's firm support to the OSCE Minsk Group, and in particular to the sustained efforts of its co-chairs, aimed at a peaceful resolution of the conflict.

“I call on the parties to step up their efforts to find a negotiated solution to the conflict on the basis of the Madrid principles, which would allow progress beyond the status quo. I reiterate the EU's readiness to provide further support to efforts in this direction", she said.

The conflict between Azerbaijan and Armenia erupted in the late 1980s, when the predominantly Armenian-populated region of Nagorno-Karabakh claimed independence from Azerbaijan. It is estimated to have left more than 30,000 people dead on both sides between 1988 and 1994. The region has since remained under Armenian control.

There has been an increasing number of shootouts along the line of contact between the Armenian and Azerbaijani forces, as well as at the border between the two states.