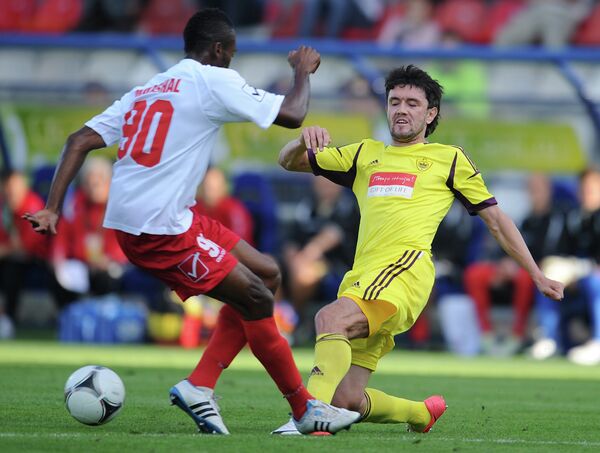 Big-spending Russian side Anzhi recorded their first European win Thursday with a 1-0 victory over FC Honved that flattered the Hungarian visitors.

Big-spending Russian side Anzhi recorded their first European win Thursday with a 1-0 victory over FC Honved that flattered the Hungarian visitors.

Anzhi, fielding three-time Champions League winner Samuel Eto’o and former English Premier League stars Yuri Zhirkov and Christopher Samba, dominated the game, but missed chances to give themselves a bigger lead ahead of the second leg in Budapest in a week’s time.

The match followed an 11-year wait for European competition, since a 1-0 defeat to Scottish side Rangers ended Anzhi’s only previous European run in the 2001-02 UEFA Cup.

The Caucasus side’s first-ever goal in European competition came on 21 minutes, when defensive midfielder Jucilei struck a low shot from outside the penalty area that bobbled off defender Aleksandar Ignjatovic’s outstretched foot and beyond the helpless Szabolcs Keremes in the Honved goal.

Two promising chances late in the first half went begging before the match petered out after half-time.

With 19 minutes gone, Samuel Eto’o dribbled into the box, beating Marko Vidovic and Ignjatovic with a sudden turn of speed before slamming the ball into the top of Kemenes’ post, where it bounced clear.

Eto’o pulled apart the Honved defense with some smart movement in the first half, and threatened the goal again on 39 minutes, seeing his powerful effort blocked after Mbark Boussoufa earlier appeared to steal the ball illegally from Kemenes.

Joao Carlos attempted a spectacular overhead kick from Oleg Shatov’s resulting corner, but the ball went high over the bar.

The match died down in the second half, with both sides struggling to create clear-cut chances, but Honved could have stolen a surprise draw on 71 minutes.

The Hungarians’ best chance of the match came when Ivan Lovric sent in a low early cross for Gergely Delczeg, only for the forward to scoop the ball over Vladimir Gabulov’s bar.

Anzhi coach Guus Hiddink picked a strong side, but used his substitutions to try out lesser-known forwards Shamil Lakhiyalov and Fyodor Smolov, who was signed on loan from Dynamo Moscow earlier this month.

The match was played at the nearly-unused Saturn Stadium on the outskirts of Moscow after UEFA banned Anzhi's home region of Dagestan from hosting Europa League games due to safety concerns.