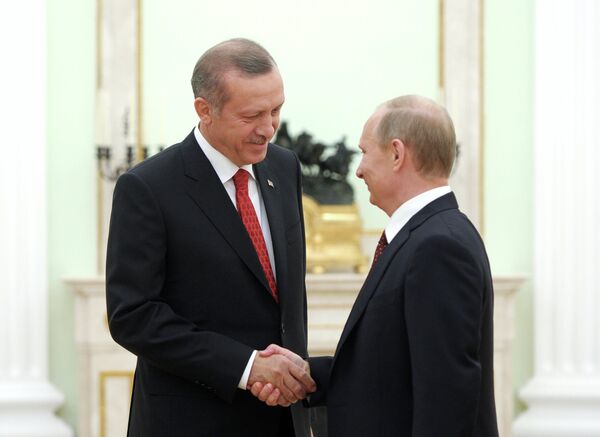 Erdogan was expected to attempt to persuade the Kremlin to abandon its opposition to a Western-backed UN resolution that could clear the way for foreign military intervention in Syria.

But there was little sign after the talks that a deal had been struck, with the Turkish premier saying only that "the Syrian people should decide" the fate of embattled Syrian President Bashar al-Assad.

Foreign Minister Sergei Lavrov said on Wednesday the adoption of the new resolution by the United Nations would amount to "direct support for the revolutionary movement" in Syria. And Russia’s UN envoy, Vitaly Churkin, said ahead of the Security Council vote that Moscow would use its veto to block any resolution that called for the ouster of Syrian President Bashar al-Assad.

Immediately ahead of the talks, Syrian state television said that the country’s defense minister had been killed in a suicide bombing at the national security building in Damascus, as heavy fighting continued to rage in the capital. The rebel Free Syria Army said earlier this week it had launched the final battle for control of Damascus.

Putin vowed earlier this year not to allow a repeat of the “Libya scenario,” which saw the ouster and murder of long-time Libyan dictator Muammar Gaddafi after a NATO military campaign. Both Russia and China have blocked previous UN resolutions against Assad’s regime, which the United Nations has accused of complicity in the massacre of unarmed civilians.

Erdogan’s visit comes a day after Putin’s meeting with UN special envoy Kofi Annan, which did little to boost Western hopes that Russia would change its stance on what the United States has said is its support for Assad. Putin said only that Russia remained committed to Annan’s floundering peace plan and Foreign Minister Sergei Lavrov urged Western powers to seek a “compromise” deal on Syria.

Annan’s plan does not call for the departure of Assad - something Russia has said should be determined by “the Syrian people.” But Russia has also said it has no special interest in seeing Assad remaining in power and earlier this week Lavrov dubbed calls for Moscow to persuade him to stand down “unrealistic.”

The draft resolution to be discussed on Wednesday gives the Syrian government 10 days to pull out heavy weapons from urban areas and return troops to barracks. If Damascus fails to comply, a further resolution on sanctions will be submitted to the Security Council.

Turkey, which neighbors Syria, has provided shelter to refugees fleeing the violence in Syria and has been one of Assad’s harshest critics during the almost 17-month revolt against his rule.

Tensions between Turkey and Syria flared dangerously last month after Damascus shot down a Turkish fighter that had violated its airspace. Turkey threatened retaliation if there was any repeat of the incident, although it admitted the plane had mistakenly strayed slightly into Syria.

Russian analysts had agreed there was little chance Erdogan would succeed where Annan had failed, they differed on what would follow the expected Russian and Chinese vetoes.

“If there is no compromise, there will be no more resolutions, and the West, along with leading Arab states, will begin to more actively and more openly support the opposition and hope that Assad will be toppled by force,” said Fyodor Lukyanov, editor-in-chief of the Russia in Global Affairs journal.

“Certain countries might also recognize the [opposition] Syrian National Council as the legal government,” he added.

Other Russian analysts have suggested the Kremlin's stance is convenient for the West, which they say has no real intention of undertaking a military operation in Syria.

“There will simply be more resolutions, discussions, Russian counter resolutions and so on until the situation becomes clear,” said analyst Sergei Demidenko of the Moscow-based Institute of Strategic Studies and Analysis think-tank. “The West has no appetite for intervention in Syria and the current situation suits it.”

The United Nations, quoting Syrian rights activists, says some 16,000 people have died in Syria since the start of the revolt.