No Helicopters on Board Ships to Syria - Rosoboronexport 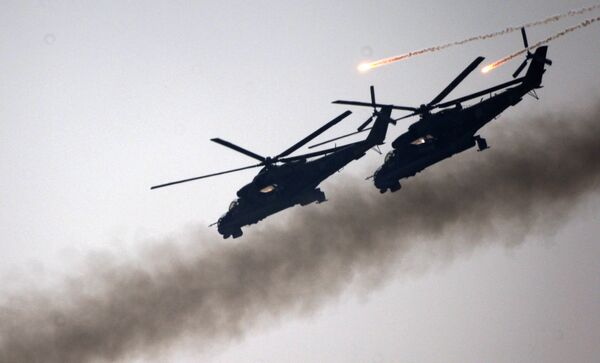 Russia's state-run arms company denied on Friday that any of its warships presently heading for Syria were carrying Mil Mi-25 helicopter gunships it had tried to deliver last month in a civilian cargo vessel, and said they were still on board that ship.

Russia's state-run arms company denied on Friday that any of its warships presently heading for Syria were carrying Mil Mi-25 helicopter gunships it had tried to deliver last month in a civilian cargo vessel, and said they were still on board that ship.

A group of Russian warships from the Black Sea, Northern and Baltic fleets are currently in transit to military exercises in the Atlantic, Mediterranean and Black seas, a Russian military official told RIA Novosti on Tuesday.

The Russian-owned cargo vessel Alaed had to stop off the coast of Scotland on June 18 with a cargo of three Mi-25 attack helicopters on board after the British insurer Standard Club withdrew its cover for the ship. It later turned back and entered the port of Murmansk.

Femco, the Russian shipping company which owns the Alaed, has criticized Standard Club for what it says was its “baseless action” in withdrawing insurance cover.

“We will not judge whether Standard Club’s actions were correct or not – that is a matter for the lawyers and the maritime community," the company said in reply to questions from a Financial Times journalist posted on its website. "We think the Club’s actions were unjustified, because it was presented, at its request, with all the necessary explanations including a copy of the cargo manifest and all the legal cargo documents.”

Danish company United Nordic Shipping, which had chartered the Alaed, unilaterally broke off its agreement with Femco, after which Standard Club withdrew insurance cover. Femco says at present, cover has been withdrawn only from the Alaed.

Femco later changed the ship's registration - which had originally been in the Netherlands Antilles island of Curacao - and it is now Russian-flagged.

The Deputy Head of Russia's Federal Service for Military Technical Cooperation, Vyacheslav Dzirkaln, said on July 11 that the Russian Navy would carry out its duty to defend Russian shipping in the event of a blockade of Syria.

The helicopters were the center of a diplomatic row in June after the United States accused Russia of supplying weapons which could be used against peaceful demonstrators. Russian denied the accusation, saying it was only returning aircraft and air defense systems which had been repaired under a previously agreed contract, and the weapons were not capable of being used against civilians.