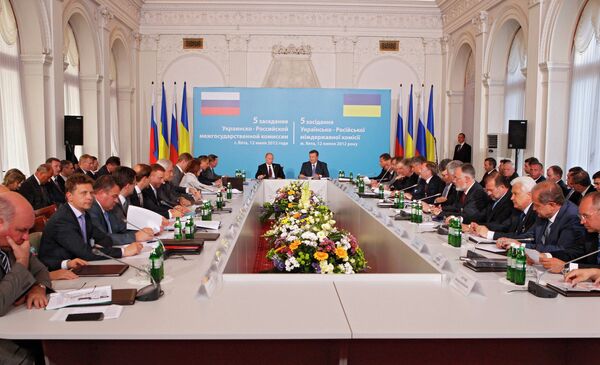 Russian President Vladimir Putin and his Ukrainian counterpart Viktor Yanukovych have signed a preliminary agreement on the delimitation of the maritime border between the two countries in the Kerch Strait.

Russian President Vladimir Putin and his Ukrainian counterpart Viktor Yanukovych have signed a preliminary agreement on the delimitation of the maritime border between the two countries in the Kerch Strait.

“We have agreed to speed up negotiations in order to finalize the delimitation in the Black Sea and the Sea of Azov, as well as in the Kerch Straight, as soon as possible,” Yanukovych told journalists after a meeting of a Russian-Ukrainian intergovernmental commission near the Black Sea city of Yalta on Thursday.

The Russian-Ukrainian maritime border in the Kerch Strait which links the Sea of Azov to the Black Sea, has long been a bone of contention between the two states. It was remaining undefined since the collapse of the Soviet Union.

According to Soviet-era maps, the border between Russia and Ukraine was directly down the middle of the Kerch Strait. However, the man-made Kerch-Yenikal Channel, which is navigable for large ships, then falls into Ukrainian waters.

In the summer of 2003, a bitter dispute broke out between Russia and Ukraine over the Tuzla Island in the middle of the Kerch Strait, which came to a head when Russia tried to construct a dam on the island. Ukraine accused Russia of encroaching on its territory.

In line with Thursday’s preliminary agreement, the Tuzla Island would be considered Ukraine’s territory, a souse in the Russian delegation said.

Meanwhile, a senior Russian lawmaker said he believed the agreement was in Russia’s interests and in line with “historical justice.”

“As for Tuzla Island, there has always been an opinion that it belongs to Ukraine,” Dmitry Sablin, the first deputy head of the Russian parliamentary committee in charge of relations with the Commonwealth of Independent States (CIS), said.

Russian political analyst Alexei Vlasov said he believed the agreement was a result of a “compromise” between Russian and Ukraine.

“Moscow and Kiev have both made certain concessions,” he said without specifying.