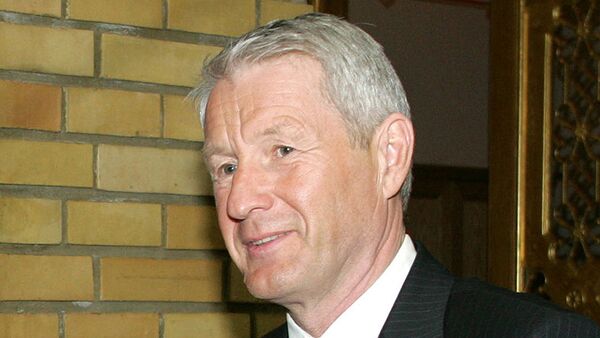 © RIA Novosti . Sergei Subbotin
Subscribe
A Russian draft law that would label non-governmental organizations (NGOs) whose political activities are funded from abroad “foreign agents” is reminiscent of methods used by Soviet secret police, the head of the Council of Europe said on Thursday.

A Russian draft law that would label non-governmental organizations (NGOs) whose political activities are funded from abroad “foreign agents” is reminiscent of methods used by Soviet secret police, the head of the Council of Europe said on Thursday.

“The wording is a problem. ‘Foreign agent’ sounds very bad to me and also, I think, to many others abroad and in Russia,” said Thorbjorn Jagland, in an exclusive interview with RIA Novosti’s English-language service. “Some of those executed during the [Joseph] Stalin era were called foreign agents.”

“This was an expression that was used against dissidents during this period. It is also very often used in other authoritarian regimes against everybody that has different views. It’s a simple way to get people out of the debate and to get the views you don’t like out of the debate. Just call them a foreign agent and you can shut up – you have nothing more to say.

"This is unfair, it’s inappropriate and it shouldn’t be used in a modern lawmaking – it belongs to the past and it does not belong to a democratic society,” Jagland said in a telephone interview.

Failure to comply with the law could result in maxiumum jail sentences of four years and/or fines of up to 300,000 rubles ($9,200) for NGO members. The law would also tighten the government’s financial control over NGOs.

The controversial bill is being fast-tracked through parliament and is likely to be approved on Friday in its second and third readings by the lower house. It will then go to the upper house and, if passed, to President Vladimir Putin for final approval. A Kremlin source said earlier this week that the bill could enter law this fall.

And Jagland also expressed concern at the speed at which both the NGO bill and a recent law greatly increasing fines for violations of protest laws were being rushed through the legislative process. The protest law was signed into law by Putin less than a month after it was submitted to parliament, despite massive domestic and international criticism.

Both laws, as well as a bill to increase the government’s power to close down blacklisted websites, come with Putin facing the biggest challenge to his rule since coming to power in 2000. Protests against his return to the Kremlin this May after four years as prime minister have seen tens of thousands take to the streets of Moscow.

“Making laws is a very serious business…and not something that can be done in an ivory tower,” Jagland said. “It is not only for the lawmakers. It is something the whole of civil society should be involved in. That’s why it is important to have a slow process.”

Putin said earlier this year that the United States was pumping millions of dollars into NGOs to try to influence the results of elections in Russia. He has also called foreign-funded NGOs “jackals” in the past.

And the former KGB officer said on Wednesday as the bill was approved in its first hearing that he agreed in principle with the bill, but did not rule out amendments, if necessary.

“It was encouraging to see the president is ready to look into this and recommend some changes to this law,” Jagland said.

One of the architects of the bill, ruling United Russia party lawmaker Alexander Sidyakin, told RIA in a wide-ranging interview last week that he saw nothing wrong with the term “foreign agent.”

“I think the idea that ‘foreign agent’ means ‘spy’ is more of a hangover from the Soviet period in which our parents grew up,” he said. “We should try to get over Cold War terminology. I believe there is nothing insulting in this term.”

Sidyakin singled out the independent election monitor Golos as an example of what he said were attempts by the United States to “affect Russian politics,” citing at a parliamentary committee hearing last week the “$2 million given to the organization in 2011 to dirty the Russian authorities.”

Golos, which monitors alleged election violations in Russia, freely admits to receiving funding from abroad and members have said Russian businessmen are afraid to donate for fear of repercussions.

Russia’s oldest rights organization, the Moscow Helsinki Group, has said it will close down its offices rather than comply with the law. Russia’s Public Chamber also said last week that it would not support the bill - which has also been criticized by the Kremlin’s own rights council - in its current form.

Moscow Helsinki head, Lyudmila Alexeyeva, said she would appeal to the U.S. Congress and the European parliament to add the authors of the bill to a visa blacklist drawn up in connection with the death of lawyer Sergei Magnitsky in a Moscow pre-trial detention center in 2009.

The move saw United Russia deputies sign up en masse to become co-authors of the bill.

The bill has also been criticized by the United States.

“We believe that people everywhere should enjoy the same fundamental freedoms and universal human rights,” said Patrick Ventrell, a spokesman for the U.S. Department of State, on Wednesday.

“The Russian people, like people everywhere, deserve the right to be heard and have a voice in government. That’s why we’ve raised our concerns about the potential passage of this new NGO legislation,” he added.