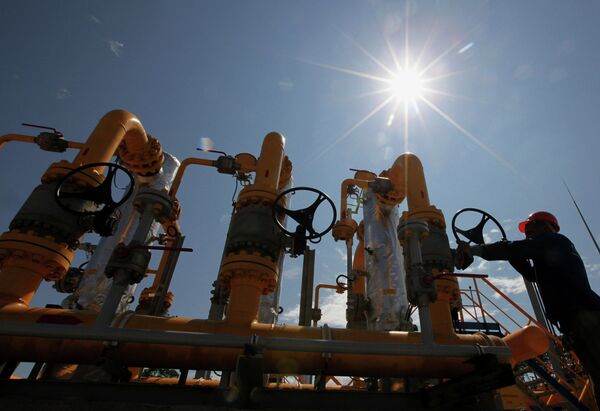 Ukraine is in talks with Russia and the European Union (EU) on establishing a joint gas consortium to manage its gas transportation system, Ukrainian President Viktor Yanukovych said on Wednesday.

Ukraine is in talks with Russia and the European Union (EU) on establishing a joint gas consortium to manage its gas transportation system, Ukrainian President Viktor Yanukovych said on Wednesday.

“We want to establish a gas transportation consortium, but this requires a huge amount of money which Ukraine doesn’t have,” Yanukovych told a meeting with regional media chiefs.

“So we are discussing these issues. We are talking about a bilateral and a trilateral consortium, but at the same time we want to preserve our own transportation system,” he added.

Yanukovych is set to discuss the issue with Russian President Vladimir Putin, who arrives in the Ukrainian Black Sea resort of Yalta on Thursday. However no gas deals are expected to be signed during the talks.

“The current 10-year contract is not profitable for Ukraine. There is nothing good for Russia in this either,” Yanukovych said. He added that if both countries ran a joint consortium, the Ukrainian gas transportation system would pump 200 billion cubic meters of gas, instead of the current 100 billion.

Russia and Ukraine are embroiled in a drawn-out dispute over the price and volume of Russian gas purchased by Ukraine. Kiev insists the current price is too high, while Moscow is pushing for control of Ukraine’s system of gas transit to Europe.

Both parties have said in recent months that they see a consortium to manage the Ukrainian gas transit system as a possible solution to the row, but have not agreed on details of the potential project.

Ukraine wants 34 percent in the consortium, leaving 33 percent each for Russia and the EU.