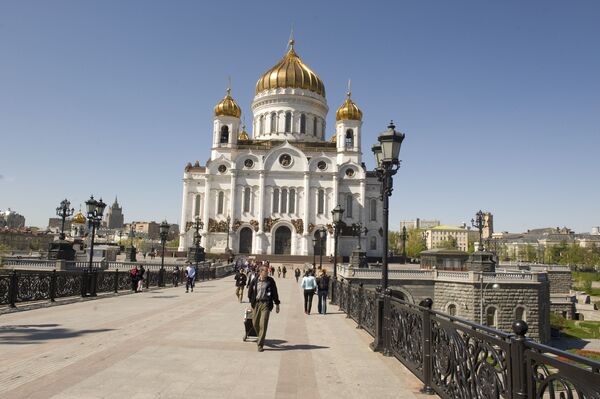 A district court in Moscow ruled that the dispensation of various goods for money in the capital’s Christ the Savior Cathedral is a charity activity and not a business.

A district court in Moscow ruled that the dispensation of various goods for money in the capital’s Christ the Savior Cathedral is a charity activity and not a business.

Clients are required to make a voluntary donation, not a payment, which can be any amount of money despite the price tags found on the items for sale, the defense said. The judge accepted this reasoning late on Tuesday.

The lawsuit was filed by the Consumer Rights Protection Society, a prominent consumer rights watchdog, which accused the Moscow Patriarchate of the Russian Orthodox Christian Church of running lucrative businesses at the cathedral while ignoring regulations for retail.

The cathedral, situated some 600 meters south of the Kremlin, is home to a car wash and a dry cleaner, and offers food, jewelry, and even plastic bags for sale. It is owned by the city, not the church, but the patriarchate is managing its operations.

The patriarchate said earlier it was not responsible for trade at the cathedral, but still appeared as a defendant in court, its lawyers claiming the sale was in fact charity.

All goods on sale were religious items because they were sprinkled with holy water, the defense added, Gazeta.ru reported.

Meanwhile, Moskovskie Novosti newspaper tried on Wednesday to follow through on the church’s proposed model of payment by visiting several Moscow churches, including Christ the Savior Cathedral, and trying to pick up “charity” items for donations smaller than the price tags. All attempts to pay less than the allegedly voluntary donation sum failed, the paper said.