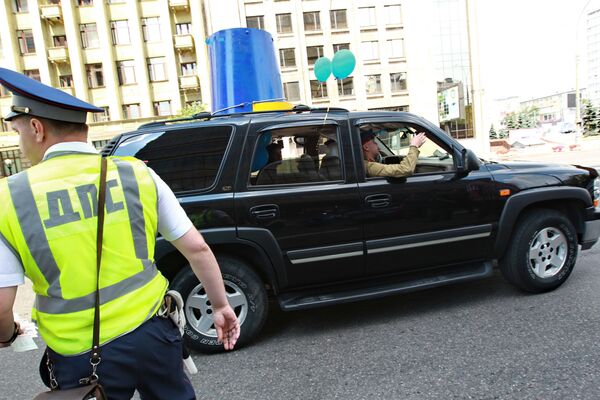 A leading Russian motorist rights group has been denied official registration in what it says is an attempt to pressure it into abandoning activism.

A leading Russian motorist rights group has been denied official registration in what it says is an attempt to pressure it into abandoning activism.

The Blue Buckets group applied for registration in late May, but the Justice Ministry threw out their request, citing various violations in their charter, the group said on Wednesday.

But group coordinator Pyotr Shkumatov told RIA Novosti the real reason behind the refusal was The Blue Buckets plans to campaign for motorists rights.

“They told us when we went there that they want us to give up rights activism as a formal goal of our organization,” Shkumatov said.

“But what’s the point of our group otherwise?” he asked.

The Blue Buckets will appeal the ministry’s decision in court and continue their activities without official registration, as they have done since their inception in 2010, Shkumatov said.

The Justice Ministry failed to comment on the matter on Wednesday, two of its departments redirecting phone inquiries to a third, where no one was available.

The main target of Blue Buckets’ activism is abuse of road privileges by officials, many of whom are entitled to violate traffic rules when they use flashing blue lights. One of the group’s early stunts included placing small buckets which looked like blue lights on their cars, confusing traffic police.

The group also provides legal support for motorists involved in road accidents with officials, who Shkumatov said often utilize their connections to pin the blame on the other party.

He refused to speculate on why the government would be opposing the Blue Buckets’ activism, but fellow group member Mikhail Voronkov said that it could have been part of a broader crackdown on rights groups in the country.

A controversial bill branding all “political” NGOs receiving funding from abroad “foreign agents” and tightening regulations for them is currently under review in the State Duma.

Many activists and analysts say the bill targets nonpartisan groups like independent election watchdog Golos, which reported numerous violations at the recent parliamentary and presidential elections, though most allegations were never proven in court.

The Blue Buckets’ problems are part of the same trend that has seen Kremlin mount pressure on NGOs and the government’s political opponents, said independent political analyst Dmitry Oreshkin.

Oreshkin said the government is trying to stem discontent, which already triggered mass opposition protests after the recent elections, by denying it a voice.

The Kremlin has previously tightened legislation regulating political rallies, and the ruling party, United Russia, has also proposed to criminalize libel, which could also possibly target many of its vocal critics.

“It’s a general trend that will only grow in the short term,” Oreshkin said.