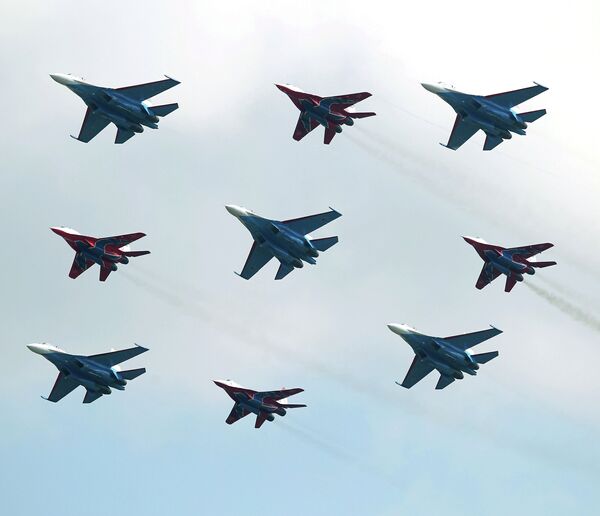 Russia’s Federal Service for Military and Technical Cooperation and the Defense Ministry will prepare a framework agreement regulating Russia’s participation in international airshows.

Russia’s Federal Service for Military and Technical Cooperation and the Defense Ministry will prepare a framework agreement regulating Russia’s participation in international airshows.

The decision was made following a scandal over required paperwork and visa travel issues that prevented the Russian Knights aerobatic display team from participating in the ongoing Farnborough 2012 airshow near London.

“We have decided to draft a framework agreement with the Defense Ministry on airshows…to avoid the repetition of similar situations in the future,” the service’s Deputy Director Vyacheslav Dzirkaln told reporters on Wednesday.

The official said Russia’s notorious bureaucracy and Britain’s stalling on visas for Russian participants of the show had caused the team to miss the airshow.

Dzirkaln added that the Defense Ministry had not requested in time a mandatory permit for the Russian Knights’ participation in the show, which resulted in visa and application paperwork delays and cancellations.

He also criticized the "sluggish" work of British immigration officials.

“Visas were not issued until the last moment, and if they were not issued, half of the Russian displays would have been left without our people,” he said.

The Russian Knights pilots fly the highly maneuverable and multi-role Sukhoi Su-27 Flanker-B and Su-27-UB Flanker-C fighters either solo or in formation. They became the first Soviet aerobatic team to perform abroad, traveling to the United Kingdom in September 1991.