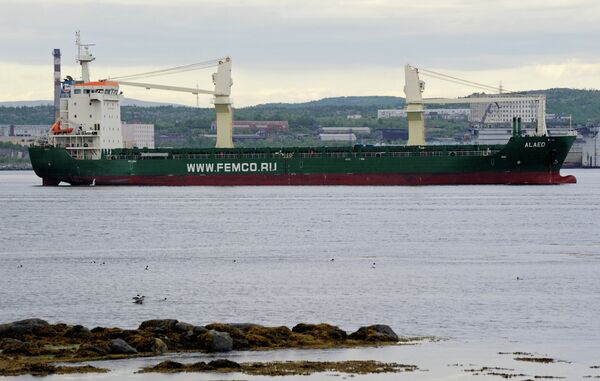 © RIA Novosti . Sergey Eshenko
/
Go to the photo bank
Subscribe
Russian Navy warships will be sent to defend Russian merchant shipping in the event of a blockade due to the situation in Syria, the deputy head of Russia's military technical cooperation agency said at the Farnborough air show in Britain on Wednesday.

Russian Navy warships will be sent to defend Russian merchant shipping in the event of a blockade due to the situation in Syria, the deputy head of Russia's military technical cooperation agency said at the Farnborough air show in Britain on Wednesday.

The Defense Ministry said on Tuesday a Russian naval task force was on its way to carry out naval exercises in the Atlantic, Mediterranean and Black Seas.

The Russian cargo ship Alaed, which was carrying a cargo of renovated Mil Mi-25 helicopter gunships to Syria, was forced to stop on June 18 and return to Russia after its insurance cover was withdrawn by a British insurer.

Dzirkaln said Russia has not embargoed its existing arms contracts with Syria and will fulfill existing contracts for air defense systems and helicopters, in clarification of a statement made on Monday which indicated no new arms deliveries would be made by Moscow to Damascus.

Syrian opposition expressed concern on Wednesday over the departure of Russian warships to the Mediterranean as the presence of the Russian Navy near the Syrian coast could encourage the Assad regime to use even more violence against protesters.

“We have discussed this problem with Russia,” senior member of Istanbul-based opposition Syrian National Council (SNC) Burham Ghalioun told a news conference at RIA Novosti. “We are concerned with the fact that these maneuvers coincide with the escalation of the situation [in Syria].”