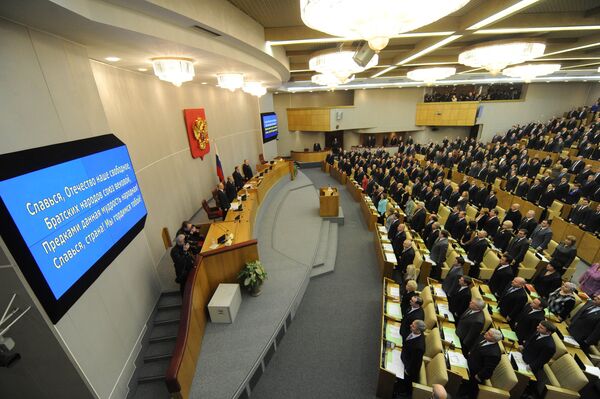 Russia’s parliament approved on Wednesday legislation to give the state powers to block blacklisted websites, a move criticized by internet freedom activists who say the law could be used to crack down on dissent.

Russia’s parliament approved on Wednesday legislation to give the state powers to block blacklisted websites, a move criticized by internet freedom activists who say the law could be used to crack down on dissent.

The all-party State Duma committee that drafted the bill says it is necessary to combat websites that carry child pornography, drug promotion material and advice on suicide. The law will see the creation of a federal agency to rule on which websites should be closed down.

“It is always argued that these laws are against extremism, child pornography, and so on, but this legislation will hit the opposition and freedom of political expression,” said Alexander Morozov, a popular blogger and head of Moscow’s Center for Media Studies think-tank.

Analysts say Kremlin control over national television channels has meant the internet has played a major role in the rise of unprecedented dissent against the twelve-year rule of President Vladimir Putin. Opposition figurehead Alexei Navalny, a popular anti-corruption blogger, said on his blog earlier this week that the bill would transform the internet into a “Zombie Box” – opposition slang for national TV.

But the head of the committee, Yelena Mizulina, said this week that critics of the bill were falsely attempting to accuse the authorities of censorship. “But there is no censorship here,” she said.

Mizulina’s comments came after the Russian-language Wikipedia website closed down for a day on Tuesday and blacked out its logo in protest at the bill. "Imagine a world without free knowledge," a statement on the otherwise empty site said.

And Prime Minister Dmitry Medvedev, a keen user of social networks, appeared to at least partially criticize the bill ahead of the parliamentary vote on Wednesday.

“The basic principle is that the Internet should be free,” he told leading officials in his ruling United Russia party. “But it should also observe people’s basic rights and laws, including the right to information, but also the right to protection from harmful content.”

The bill has already been slammed by the Kremlin’s own council on human rights, which said last week that the law would see a "new electronic curtain" descended on Russia. The advisory body has also sharply criticized a number of recent bills, including one that vastly increases protest fines and a draft law that would force foreign-funded, non-governmental organizations (NGOs) engaged in politics to declare themselves “foreign agents.”

“This looks very much like censorship,” said Oleg Kozyrev, one of Russia’s most popular bloggers and an opposition activist. “Taken along with recent laws on protest fines, NGOs and defamation, this is clearly part of an attempt to introduce a legal basis for repressive measures against independent media, bloggers and opposition figures.”

But Kozyrev said that even if the authorities managed to completely silence internet dissent, this would do nothing to stop people organizing protests.

“Remember, in 1991, there was no internet at all and people gathered around the White House to defend it,” he said, referring to the crowds that camped out outside the seat of the Russian parliament to resist a coup attempt by Communist hardliners.

The bill will now go to the upper house and could enter into law on January 1, 2013.