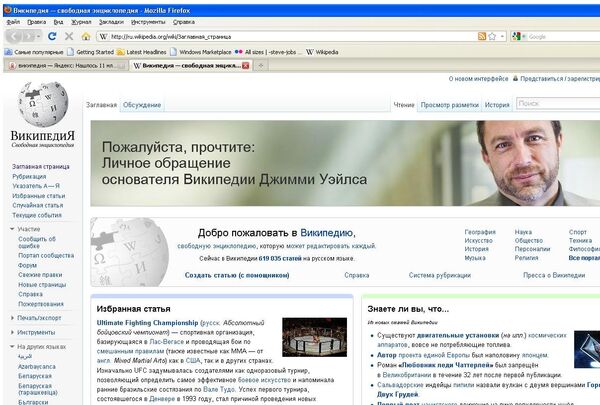 The Russian-language segment of Wikipedia, the world’s largest free on-line encyclopedia, temporarily suspended its work on Tuesday in protest against a bill proposing a unified digital blacklist of all websites containing banned content

The Russian-language segment of Wikipedia, the world’s largest free on-line encyclopedia, temporarily suspended its work on Tuesday in protest against a bill proposing a unified digital blacklist of all websites containing banned content.

The draft legislation, supported by all four party factions in the State Duma, has been widely criticized by civil rights activists and internet providers as an attempt to introduce censorship of the Russian segment of the internet (RuNet).

“Wikipedia community protests against censorship, which threatens free knowledge opened for the mankind,” Wikipedia says in a statement on its Russian-language website.

“We ask you to support us in the fight against this bill,” the statement says.

The site is expected to stay offline for 24 hours.

The lower house of the Russian parliament, the State Duma, passed the controversial bill in the first reading on July 6 and will debate the document in the second reading on Tuesday.

The idea of the blacklist originated last year from Russia’s League of Internet Security after the internet watchdog said it had broken up an international ring of 130 alleged pedophiles circulating material via the internet.

According to the draft document, submitted to the State Duma on June 7, the unified roster of banned websites will be run by a federal agency to be appointed by the government.

The agency will have the right to add items to the blacklist, as will the courts, which already have the authority to ban extremist and other types of content that violates Russian legislation.

The supporters of the blacklist believe it would curb the spread of on-line pornography and propaganda of extremism.

However, the opponents of the idea insist that the current version of the bill cannot be an effective tool for rooting out the illegal content and stopping its spread on the internet as it will not prevent “dirty” users from migrating to other domains and IP-addresses.

Wikipedia went offline for 24 hours in a similar action on January 18 in a protest against U.S. anti-piracy legislation that could lead to censorship. As a result of "blackout" protests on thousands of internet sites, the U.S. Congress has postponed the vote on two controversial bills until issues raised about them were resolved.