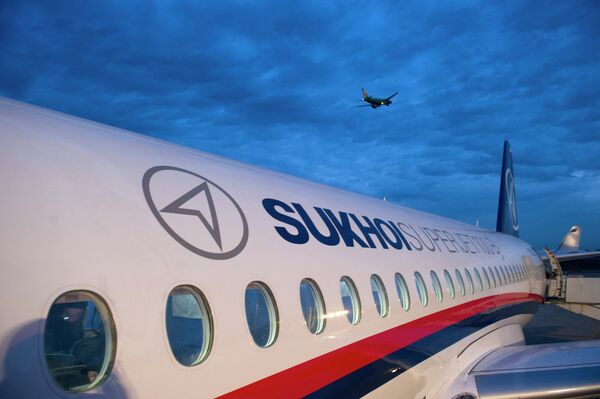 Major international air shows are always called on to market aircraft and related equipment. The Farnborough International Airshow, due to open on July 9, 2012, is no exception. So this might be a good time to assess Russia’s changing approaches towards aircraft exports.

Major international air shows are always called on to market aircraft and related equipment. The Farnborough International Airshow, due to open on July 9, 2012, is no exception. So this might be a good time to assess Russia’s changing approaches towards aircraft exports.

As a rule, the Russian aircraft industry exports a lot of military equipment. This year, the Russian delegation will, as usual, display warplanes. But Russia will also present civilian aircraft, including the Sukhoi Superjet 100 and the MS-21 airliners.

These airplanes and their potential “heirs” will find a place in Russian aircraft exports if the United Aircraft Corporation really diversifies its product range.

This family includes the Su-27; all modified versions of the Su-30 fighter; the Su-34 and Su-35. Although the rather unusual Su-34 fighter-bomber was never exported, hundreds of other Sukhoi fighters have been exported. At the same time, the new Su-35 has not yet been delivered abroad.

The long-term situation will change only slightly. Demand for the T-10 platform, which is the ultimate achievement in the fourth-generation of aircraft technology, will gradually subside. It appears that the new Su-35 fighter, which has impressive potential, will replace some of the Su-30 warplanes, which are steadily being deactivated.

The T-50 platform, Russia’s fifth-generation fighter called the Advanced Front-Line Aviation Complex (PAK FA) and the Fifth Generation Fighter Aircraft (FGFA) being developed for the Indian Air Force, already loom on the horizon. Obviously the FGFA will become the main export version of the “general-purpose” T-50.

Even without a major domestic contract, Sukhoi’s plants will have enough orders to keep them busy. For instance, the Irkutsk Aviation Plant manufactures Su-30MKI fighters and the Yakovlev Yak-130 Mitten combat trainer, which has impressive export potential.

The fate of the Russian Aircraft Corporation MiG, another major warplane manufacturer, seems more bleak as regards exports. The numerous industrial facilities and specialists at MiG, the pampered child of the Soviet defense industry, has fallen behind Sukhoi and Irkut who assemble the far more popular Sukhoi warplanes.

Technically, a large contract could hurt the MiG Corporation rather than help it, because MiG has lacked the export earnings to invest in modernization projects. Some analysts claim that, had the MiG-35 Fulcrum-F fighter won the mammoth Indian Air Force tender for 126 fighters, they would have trouble meeting their obligation. In the long run, France’s Dassault Rafale fighter won the tender.

MiG currently has a limited number of contracts, mostly for the MiG-29K Fulcrum-D carrier-borne fighters. These planes have been virtually overhauled in line with Indian requirements and are also currently purchased by Russia’s naval aviation units. In addition, MiG is upgrading the Indian Air Force’s MiG-29B fighters, which were delivered during the Soviet era, and which are now being rebuilt as the MiG-29UPG.

Attempts to sell the MiG-29K’s ground-based versions, including the MiG-29M/M2 and the MiG-35, have so far failed to achieve much success. Although the MiG-29M is scheduled for delivery to Syria, the current instability there creates questions about the contract’s implementation. And the MiG Design Bureau has so far failed to develop any entirely new warplanes.

The MiG Corporation sees stage-by-stage and evolutionary warplane production expansion and exports as a healthy foundation for modernizing its entire production complex. At the same time, Sukhoi, which has already moved beyond this stage, now plans to diversify its product range, primarily through expanded civilian aircraft manufacture.

The Russian aircraft industry had effectively consolidated its assets throughout the early 2000s and focused on developing new civilian airliners. The first results of this effort have only been evident in recent years, although the initial prospects seemed to be much more promising.

The 2011 International Aviation and Space Show (MAKS-2011) in Zhukovsky outside Moscow featured a multitude of civilian airplanes. For the first time, it seemed that contracts for new generations of passenger airliners turned out to be more important than warplane contracts.

For instance, the MAKS-2011 show featured the Sukhoi Superjet 100 airliner, which had just taken to the skies at that point. Developed by the Sukhoi, the SSJ-100 is manufactured in Komsomolsk-on-Amur. The Yakovlev MS-21 airliner, which has not flown yet, was also displayed at Zhukovsky. There are plans to assemble this plane at the Irkut Corporation’s Irkutsk Aviation Plant. Contracts for the MS-21 airliner worth about $10 billion have already been signed.

This is the most interesting area of potential aircraft exports, but it is also fraught with the greatest development problems.

First, the civilian aviation market is much more developed than the rather tentative military aircraft market. This means that standard bilateral agreements will not result in the necessary sales volumes, and that the Russian industry will have to fight it out for net profits.

But Russia’s civilian aircraft sector lags behind Boeing and Airbus, the two main global airliner manufacturers. The market is crowded, and the understandable distrust for new planes will hinder Russian airliner sales to some extent. It should be noted, though, that Brazil’s Embraer has carved out a niche in the regional airliner market virtually from scratch, and that it has become a global player in that segment.

The United Aircraft Corporation will have to stop focusing on warplane exports and prioritize the global airliner market instead. This will make it possible to effectively diversify production.

Survival of the fittest

The United Aircraft Corporation still needs to attain a balanced sales mix, like that in the helicopter industry. Right now domestic helicopter deliveries and exports are divided evenly. The share of military and civilian helicopters is also just about the same.

This was accomplished by effectively taking advantage of Soviet-era technology. For example, the Mil Mi-8/Mi-17 Hip helicopter family comprises multi-role and dual-purpose versions. And the delivery of specialized combat equipment, including the Mi-28N or the Kamov Ka-52 attack helicopters, is ensured by the state’s desire to keep the helicopter fleet up to date. A consistent number of contracts have kept the plants busy and technically current allowing production to keep pace with market demand.

However, Russian Helicopters, the successful national helicopter developer and manufacturer, faces an uncertain future which is its biggest problem. The corporation should take advantage of the strong demand for its entire product range, and it should invest in new research projects. As in chess, the player with the advantage must attack for fear of losing it.

In this sense, the helicopter industry objectives are quite different from those of the civilian and military aircraft sectors. Helicopter production has already been streamlined or is being streamlined, and specific markets have been won. However, the next generation of product must still be developed and promoted.

Unlike civilian aircraft manufacturers and virtually all warplane-makers, with the exception of Sukhoi and Irkut, Russian Helicopters seems to have the potential to experiment with new products.