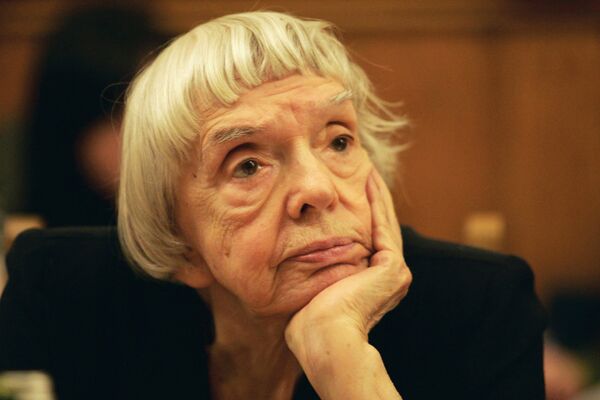 Russian human rights veteran Lyudmila Alexeyeva said on Thursday she is planning to ask the U.S. Congress, as well as the European Parliament, to add the authors of a controversial NGO bill to the so-called Magnitsky list.

Russian human rights veteran Lyudmila Alexeyeva said on Thursday she is planning to ask the U.S. Congress, as well as the European Parliament, to add the authors of a controversial NGO bill to the so-called Magnitsky list.

The ruling United Russia party has proposed a law to force foreign-funded non-government organizations (NGOs) involved in politics to declare themselves “foreign agents.”

“I am determined to ask the U.S. Senate, the House of Representatives, as well as the European Parliament to add the authors [of the NGO bill], who violate the supremacy of the law, to the Magnitsky list,” Alexeyeva said.

She also intends to publish on the Internet a list of MPs who will vote for adoption of the bill, and appeal to the Russian president to veto it.

Alexeyeva, who is head of the Moscow Helsinki Group, said previously the MHG will under no circumstances register as a “foreign agent.”

The NGO law, which was submitted to the lower house of parliament last Friday and received government backing on Monday, would oblige nongovernment organizations engaged in “political” activities that receive funding from abroad to display the words “foreign agent” on their websites and publications. NGOs would also have to publish a biannual report of their activities and carry out an annual financial audit.

The bill was proposed by United Russia lawmaker Alexander Sidyakin, the author of recent legislation changes that have sharply increased fines for protest regulation violations. That bill was drawn up just days after protesters and police fought running battles on the eve of Vladimir Putin’s May 7 inauguration for a third presidential term.

Putin said last December that the United States had encouraged unprecedented protests against his rule and that foreign countries were pumping millions of dollars into NGOs to try to influence the results of elections in Russia. Putin famously called NGOs “jackals” who “count on the support of foreign funds and governments but not the support of their own people” in a 2007 speech.

Magnitsky, a lawyer for Firestone Duncan, was working for the London-based Hermitage Capital investment fund when he was arrested in 2008 as part of an embezzlement and tax evasion investigation. The auditor died after almost a year in custody. His death triggered an international outcry.