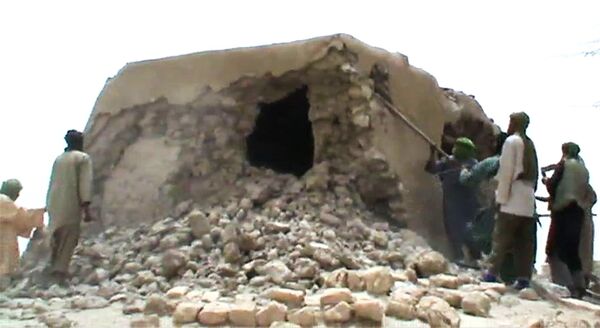 Russia has condemned the damage to religious shrines in Timbuktu, Mali, in attacks carried out by Islamic extremists, the Russian Foreign Ministry said on Monday.

Russia has condemned the damage to religious shrines in Timbuktu, Mali, in attacks carried out by Islamic extremists, the Russian Foreign Ministry said on Monday.

“According to reports from Mali, in Timbuktu, which is occupied by separatists, the militants of the Ansar Dine movement destroyed a number of mausoleums of local saints. The Islamists have vowed to continue the destruction of other historic and cultural sites because of ‘inconsistencies with the canons of Islam.’ The remaining tomb complexes, which are included on the UNESCO List of World Heritage in Danger, as well as a collection of rare manuscripts, including those of the pre-Islamic period, are on the brink of destruction,” the ministry said in a statement.

“Moscow strongly condemns acts of vandalism in Timbuktu and fully shares UNESCO's alarm. We believe that this is one more reason to consolidate international efforts to restore Mali's territorial integrity and secure law and order throughout the country,” the statement said.

UNESCO placed Timbuktu and the Tomb of Askia on its List of World Heritage in Danger last week.

UNESCO is particularly concerned that ancient manuscripts and other cultural objects will be looted from Timbuktu, which was a major outpost of Islam in Africa during the city's golden age in the 16th century.

Ansar Dine seized control of northern Mali along with Touareg separatists in March, but the two groups have since fallen into conflict.