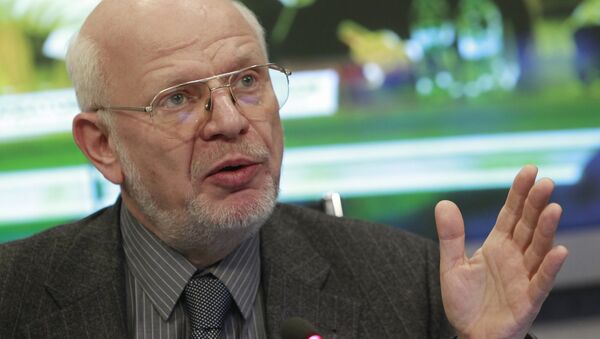 A law proposed by the ruling United Russia party to force foreign-funded non-governmental organizations (NGOs) involved in politics to declare themselves “foreign agents” was slammed on Monday by human rights groups and the head of the Kremlin’s own rights council.

A law proposed by the ruling United Russia party to force foreign-funded non-governmental organizations (NGOs) involved in politics to declare themselves “foreign agents” was slammed on Monday by human rights groups and the head of the Kremlin’s own rights council.

“The proposed legislation is too wide in reach,” Kremlin human rights council chief Mikhail Fedotov told RIA Novosti. “I hope very much that the bill will not be passed.”

“The law could even concern the Russian Orthodox Church, as the law relates to any non-commercial organization that receives funds from foreign citizens,” he noted. “And, of course, the Orthodox Church receives donations from abroad.”

The law, which was submitted to the lower house of parliament last Friday and received government backing on Monday, would oblige nongovernmental organizations engaged in “political” activities that receive funding from abroad to display the words “foreign agent” on their websites and publications. NGOs would also have to publish a biannual report of their activities and carry out an annual financial audit.

The bill was proposed by United Russia lawmaker Alexander Sidyakin, the author of recent legislation that sharply increased fines for violations of regulations governing protests. That bill was drawn up just days after protesters and police fought running battles on the eve of Vladimir Putin’s May 7 inauguration for a third presidential term.

Putin said last December that the United States had encouraged unprecedented protests against his rule and that foreign countries were pumping millions of dollars into NGOs to try to influence the results of elections in Russia. Putin famously called NGOs “jackals” who “count on the support of foreign funds and governments but not the support of their own people” in a 2007 speech.

Sidyakin, writing on his website last week, said the law is necessary to inform people considering going to anti-Putin protests that they are being urged to do so by “non-commercial organizations, fulfilling the functions of foreign agents.”

“There is an entire network of NGOs whose financing is suspicious from the point of view of its provider,” Sidyakin also said in a statement on the United Russia website.

But veteran human rights activist Lev Ponomaryov, of the For Human Rights organization, said the proposed law was an attack on the entire Russian civil liberties movement.

“This is a liquidation of the human rights movement in Russia.” Ponomaryov said. “We will not obey this law if it is adopted. We will not register as foreign agents.”

“Of course, no head of a human rights organization wants his or her group to be labeled a foreign agent,” he added. “This is clear - it is stupid to even explain why.”

“This law will certainly affect us and could lead to our discreditation among voters,” she said. “Surveys show that more than 60 percent of voters view negatively organizations that receive foreign funding.”

A report aired on state television ahead of last December’s parliamentary polls accused Golos of serving U.S. interests and attempting to instigate a revolution in Russia. The group, like many other Russian “political” NGOs, freely admits to receiving financial assistance.

Golos is funded in part by USAID, a United States federal agency that seeks to promote “democracy and human rights” worldwide.

The proposed law has echoes of 2006 legislation that introduced a host of reporting requirements for NGOs and placed them under tighter Kremlin control. The bill drew criticism from both Russian rights organizations and the West, but eventually did little to curtail the work of NGOs in Russia.

“The 2006 law diverted us from real work for some time and made us concentrate on paperwork,” said Amnesty International Russia head Sergei Nikitkin. “But it’s difficult to compare the two laws right now.”

“The proposed legislation is part of a tendency by the Russian authorities to move against NGOs,” he went on, adding that it would “complicate the work of not only Amnesty International, but other NGOs.”

Nikitkin also said that the proposed law seemed to have been “copied” directly from similar, little-used legislation in the United States.

The Foreign Agents Registration Act was introduced in the United States in 1938 and was a response to the looming conflict with Nazi Germany and Japan.

“But the word ‘agent’ in Russian has far more negative connotations than it does in the English language. In Russian it is a straight synonym for spy,” Nikitkin said.

Nikitkin also expressed concern over what he said was the vague wording of the proposed legislation, something he said could give rise to a “distorted interpretation of the law.”

U.S Secretary of State Hillary Clinton reportedly discussed the law with members of Russian NGOs while on a visit to St. Petersburg last week.