Russia to Crumble Without Church – Patriarch 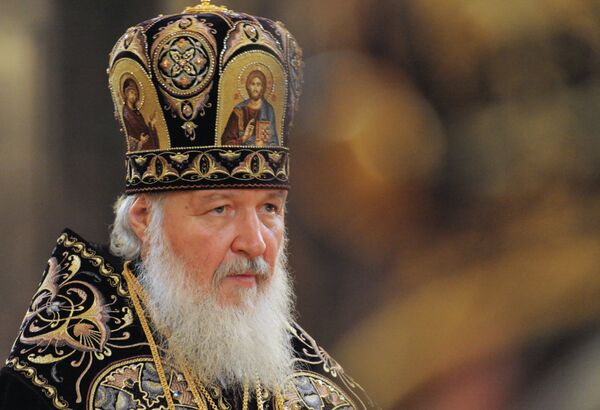 © RIA Novosti . Sergei Pyatakov
/
Go to the photo bank
Subscribe
Russia would crumble without its Orthodox Christian Church, which is why the country’s enemies always target it, Patriarch Kirill said on Thursday.

Russia would crumble without its Orthodox Christian Church, which is why the country’s enemies always target it, Patriarch Kirill said on Thursday.

The sermon appeared to be an implicit reply to the criticism of the Church by liberal media and educated urbanites sparked by its support of the Kremlin during the presidential elections in March.

“The Church is maintaining the unity of our Fatherland,” Kirill, the formal head of the church, said in a sermon in a Moscow cathedral.

“Destruction of the entity that is the Church will immediately ruin our Fatherland,” he said.

The church was the prime target for foreign invaders including the Polish forces in the 17th century, Napoleon’s Army in the 19th century and the Nazis in World War II, Kirill said.

Russian society has been growing polarized on its most influential church after Kirill endorsed Vladimir Putin for president last winter, alienating supporters of the opposition.

The situation was aggravated by scandals involving Kirill, including allegations that Kirill owns a posh apartment in downtown Moscow and sports expensive wristwatches.

Further controversy was sparked by the story of Pussy Riot, a feminist punk group whose members are under arrest and face jail terms for performing an anti-Kremlin “punk prayer” in Moscow's largest church Christ the Savior in February. Leading church hierarchs have repeatedly endorsed persecution for the group members, though Kirill has not spoken on the issue.

The church held a nationwide prayer that attracted tens of thousands in April, with Kirill saying the current attacks on the church were more dangerous than any trouble it faced in the past, including the brutal crackdown on religion by the Bolsheviks.

About 42 percent of the Russian populace identified themselves as followers of the Russian Orthodox Church, according to a nationwide study by independent pollster Sreda from 2011, the latest poll available. But religion analysts warned the figure could decrease following the recent scandals.