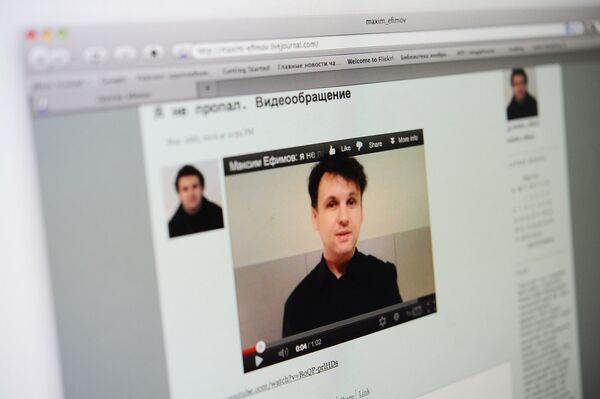 © RIA Novosti
Subscribe
International
India
Africa
The Supreme Court in the republic of Karelia overturned on Thursday a lower court’s order to put a critic of the Russian Orthodox Church into a psychiatric hospital.

The Supreme Court in the republic of Karelia overturned on Thursday a lower court’s order to put a critic of the Russian Orthodox Church into a psychiatric hospital.

But the man, rights activist Maxim Yefimov, remains on a wanted list on charges of inciting hatred toward the church by means of an internet article.

Yefimov, head of Youth Human Rights Group Karelia, published online in December an article titled Karelia Tired of Priests, slamming the church over its alleged interest toward real estate in the northern republic.

This earned him a criminal case for hatemongering, punishable by up to two years in prison.

Investigators requested a psychiatric examination of Yefimov, which ended with experts asking in May to place him into stationary care for a more extensive study of his “explicit deviations.”

Yefimov went on the run, while his lawyers appealed the court order, citing numerous rulings by prominent Russian psychiatrists, all of whom said the case does not mandate his placement in an asylum.

The Karelian Supreme Court eventually ordered a lower court to revise the request to confine Yefimov to a psychiatric hospital for a check. No date for a new hearing was set on Thursday.

Russian legislation on extremism and hate crimes is notoriously vague and criticized by many opposition and civil society activists, who accuse the authorities of abusing it for political persecution.

Punitive psychiatry was widespread in the Soviet Union and dissidents were often held and drugged for months for criticizing the government. It went largely defunct in post-Soviet Russia, though an investigation by The Moscow Times in 2011 produced a dozen separate cases across the nation where critics of authorities were allegedly put into asylums as a form of pressure.

In a separate case in Moscow, opposition activist Oleg Arkhipenkov, who is being held in custody over an anti-Putin rally last month, has been forced to take drugs during “psychiatric treatment” in detention, his lawyer said on Thursday.

Prison officials did not comment on the allegations as of Thursday afternoon.