‘Magnitsky Law’ Interference in Affairs of Another State – Speaker 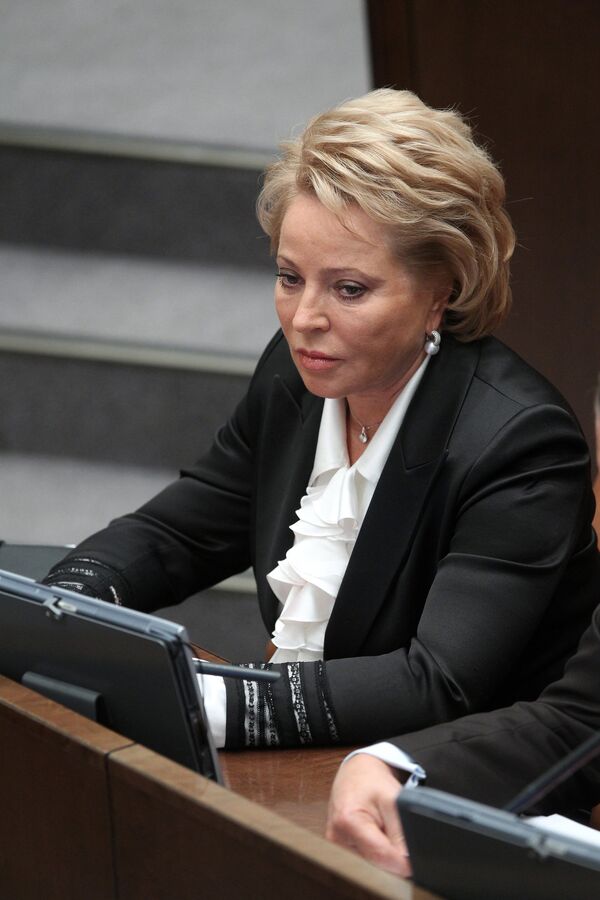 © RIA Novosti . Ilya Pitalev
/
Go to the photo bank
Subscribe
A U.S. bill aiming to freeze assets and bar entry to Russian officials implicated in the death of anti-corruption campaigner and whistle-blower Sergey Magnitsky is interference in the affairs of another state, Russian Federation Council speaker Valentina Matvienko, said on Thursday.

A U.S. bill aiming to freeze assets and bar entry to Russian officials implicated in the death of anti-corruption campaigner and whistle-blower Sergey Magnitsky is interference in the affairs of another state, Russian Federation Council speaker Valentina Matvienko, said on Thursday.

“No self-respecting country allows itself to swallow these unfriendly gestures; Russia’s Foreign Ministry has a large arsenal of ideas and options for how to respond to such a step,” Matvienko said.

The Sergei Magnitsky Rule of Law Accountability Act, sponsored by U.S. Democratic Senator Benjamin Cardin and unanimously approved by the U.S. Senate’s Foreign Relations Committee on Tuesday, would impose visa bans and asset freezes on Russian officials allegedly involved in the death of 37-year-old Russian tax lawyer Magnitsky, as well as in other gross human rights abuses in Russia or anywhere in the world.

“This bill is absolutely motivated by the circumstances of Sergei Magnitsky, but it is universal in its application," Kommersant daily quoted Cardin as saying. “The sponsors of the House bill have encouraged me to keep it universal, so I think it will not be difficult to get the House to go along with the universality.”

The names of the Russian officials aimed by the bill would remain classified.

Matvienko said the U.S. move reflects interests hostile to closer relations with Russia, and there were no real reasons to approve the law.

“Obviously, forces that are opposed to establishing a constructive cooperation between Russia and the United States are interested in its acceptance and there are such forces in the United States,” Matvienko added.

Calling the Magnitsky bill “savagery” and “open interference in the affairs of another state,” Matvienko said the draft legislation did not contribute to the further development of mutually beneficial cooperation, which the U.S. is interested in as much as Russia.

“The U.S. and Russia are two major players in international politics and economics and the overall situation in the world depends on us having normal relations,” she said.

While cooperating on fighting terrorism in Afghanistan and easing trade restrictions between the two countries, Russia and the United States are at loggerheads on a number of key global issues such as resolution of the conflict in Syria, Iran’s nuclear ambitions and U.S. plans for missile defense in Europe.

Matvienko said the U.S. should understand that after this step Russia would not “turn the other cheek,” and added that it was “not in the least wise.”

Russian Foreign Ministry has already said it is working on a list of a U.S. officials who will be barred from entering Russia and who will have their assets in Russia frozen for violating rights of the Russian citizens on the U.S. soil.

Magnitsky was arrested on tax evasion charges in November 2008, days after accusing police investigators and tax ministry officials of involvement in a $230 million tax refund fraud. He died after almost a year in a pre-trial detention center in Moscow.

A probe into his death revealed that the lawyer, who was suffering from untreated pancreatitis and a heart condition, did not receive proper medical treatment. Rights activists pointed to multiple violations of his rights during his arrest and detention, including signs that he was beaten by prison guards hours before his death.