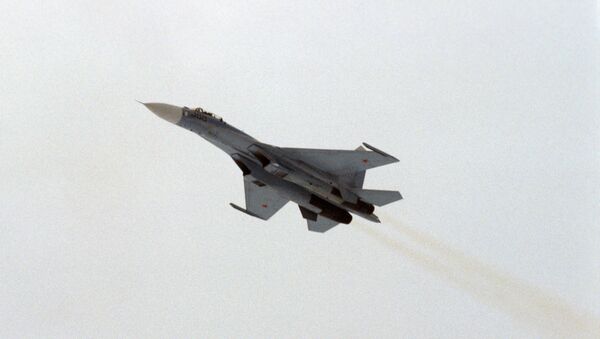 "The plane went down in the region of the village of Besovets," a local law enforcement source said.

There were no other injuries or damage on the ground, according to initial reports. The pilots were rescued and given medical checks, and are in a good condition, the air force said later.

The crash may have been caused by a bird being ingested into one of the aircraft’s two AL-31 turbofan engines, a spokesman for the Western Military District told RIA Novosti.

“Also, it is possible one of the flight control systems failed,” the source said.

The air force has suspended all Su-27 flights pending an investigation into the crash, the force said on Thursday. The Russian Air Force routinely grounds fleets of aircraft after accidents until the cause of a crash is found.

More precise preliminary information as to the cause of the incident is likely to be received in the next two days after an investigation, the source said.

The aircraft, which was on a routine weather check and training flight, was unarmed when it crashed, Defense Ministry Spokesman Colonel Igor Konashenkov said.

The Su27 is the mainstay of Russia's fighter force along with the smaller MiG-29.

The Su-27UB is a two-seat conversion trainer variant of the Su-27 single-seat fighter aircraft.