Bethlehem to Name Street in Honor of Putin 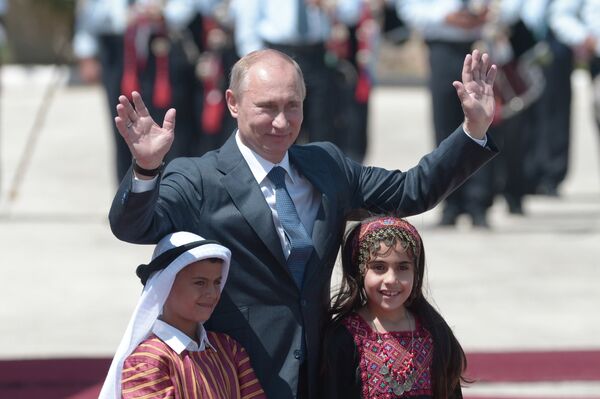 © RIA Novosti . Sergey Guneev
/
Go to the photo bank
Subscribe
Russian President Vladimir Putin said he felt "a bit confused" after a street in Bethlehem was named in his honor.згеш

Russian President Vladimir Putin said he felt "a bit confused" after a street in Bethlehem was named in his honor.

The head of the Palestinian National Authority, Mahmoud Abbas, told Putin on Tuesday that the mayor of Bethlehem had decided to name a street in the city after Putin because it would show how much the Palestinians value Putin and the Russian people.

"Just as in this case and in others, I'm usually told in advance and for me this was completely unexpected," Putin said during his two-day Middle East tour.

Putin and Abbas opened a new Russian center for science and culture in the West Bank city of Bethlehem earlier during his trip.The center was built on ground donated as a gift to the Russian Imperial Orthodox Palestinian Society (IPPO) by the Palestinian authorities four years ago.

Putin said that the names of politicians should be given to streets by the future generation in honor of those who have passed away, adding that he "would like to live a bit longer."

According to Abbas, the street leading to the center will be named after Putin. Another Palestinian city, Jericho, already has a street named after Dmitry Medvedev, who visited the country in January 2011.

Other streets carry Putin's name, including an avenue in Chechnya's capital, Grozny.