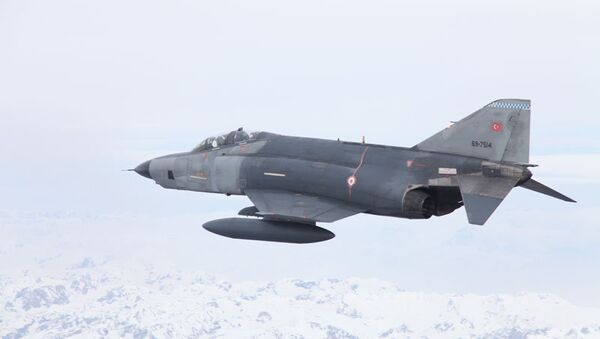 Turkey has warned the UN Security Council that Syria’s downing of a Turkish military jet represents a “serious threat” to regional security, the BBC reported on Tuesday.

Turkey has warned the UN Security Council that Syria’s downing of a Turkish military jet represents a “serious threat” to regional security, the BBC reported on Tuesday.

In a sent letter to the United Nations Security Council on Monday, Ankara condemned the "hostile act by the Syrian authorities against Turkey's national security,” the report said.

The statement came on the eve of Tuesday's emergency meeting of NATO’s governing body in Brusels called by Turkey to discuss the June 22 incident.

Syrian authorities said the Turkish F-4 Phantom plane had invaded the country’s airspace while Turkish officials claimed it was attacked over international waters.

After a seven-hour Turkish cabinet meeting on Monday, in which an air force chief gave a detailed briefing on Friday’s incident, Turkey's Deputy Prime Minister Bulent Arinc told journalists Syria's actions "would not go unpunished", but made it clear Ankara was not seeking military action, media reports said.

He added, however, "We have no intention of going at war with anyone.”

Arinc said the Turkish government would consider halting electricity supplies to Syria over the incident.

Turkish Prime Minster Recep Tayyip Erdogan reiterated in a speech before the parliament on Tuesday that the plane was shot down over international waters, not in Syrian airspace, and accused official Damascus of doctoring the facts in its version of the incident.

Ankara has called a meeting of NATO member states under Article 4 of the alliance’s founding treaty, which states that any ally can request such consultations if they feel their territorial integrity or security have been threatened.

Russian Deputy Foreign Minister Alexander Grushko said on Monday Turkey’s request of a NATO meeting was a “very alarming signal” that there is a possibility of “escalation around Syria.”

He expressed hope that NATO would not take any action that would undermine international diplomatic efforts to settle the 16-month-old crisis there.

Meanwhile, Turkey claimed on Monday that Syrian forces had fired at another jet looking for the wreckage of the first plane. The attack ceased after a warning from the Turkish side, and the second plane was not brought down, The Telegraph quoted Arinc as saying.

Syrian authorities have not commented on the statement as of early Tuesday.